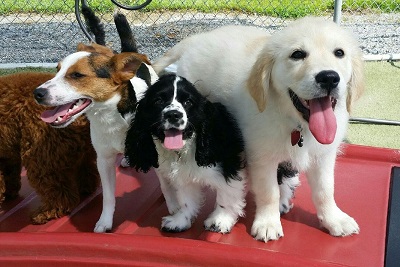 Hypothetically, you get a call from one of our Camp managers and they say to you, “I’m very sorry, but your dog is not a good fit for doggie daycare”. You ask, “Did he get in a fight?” No. “Did he hurt someone?” No. “Did he destroy something?” No. Hopefully the explanation won’t end there, but what would be your first reaction? Disbelief? I mean, your dog is friendly, has good manners, right? Would you feel angry? Probably, I mean after all, you’re paying good money for your dog to have a good time! Disappointment? Of course. We would also be very disappointed that your dog could not stay in doggie daycare.

It happens more often than you’d think… An otherwise wonderful, lovable dog is uninvited from Daycare. Why does that happen? Does that mean your dog is “bad”? How do we decide which dogs are permitted into Camp Holiday Barn Pet Resorts and which ones are not?

It is obvious why we would not allow a dog with aggression issues to attend daycare. These are not the dogs we are talking about. We’re talking about the good dogs, the well-behaved dogs. Sometimes being “ousted” from Camp has nothing to do with problem behavior. There are many reasons why a dog is not the right fit for daycare.

What are some reasons a “good” dog is denied daycare participation?

Maybe your dog prefers hanging-out with people, rather than other dogs. We see this often. You’ll see them in the play-yard sitting by the gate, not engaging with any of the other dogs. They’re not cowering or fearful, they’re just not interested. Your dog may be very well-socialized, pleasant around other dogs and people too. My own dog fits into this category. His idea of a fun day is being with his people, walking, playing fetch, or just napping by our feet. It’s not all that uncommon for a dog not to enjoy the company of other dogs.

Sometimes dogs just don’t enjoy large social gatherings. They’d rather play with one good pal than in a large group. It’s kind of like people who would rather have a cozy dinner date with one or two close friends than throw a big party with lots of people. Dogs can be like that too. It’s totally normal.

Your Dog is Overstimulated

The high energy and excitement of doggie daycare can be overstimulating for some dogs. They become overwhelmed. There are several different ways a dog can react when over stimulated:

• When their adrenalin is at an all time high, they may have difficulty calming down. They may start behaving somewhat erratically, perhaps running silly or playing too rough. Allowing a dog to stay in this stressed-out state of mind over the period of time he is in a play group is not healthy.
• The dog may attempt to hide or hover by the gate. Normally these are the dogs that are used to calm, quiet surroundings and when suddenly introduced to the commotion and activity of Doggie Day care, it’s just too much.
• Reactivity could also be the response to overstimulation. It is exhibited by one or a few of the following behaviors: barking, lunging, hyperexcitability, hypervigilance, mouthing, etc. The dog lacks impulse control. Reactivity is complex. You generally will need the help of a Professional Dog Trainer to sort out and help with your dog’s individual reactivity issues.

Your Dog Has Separation Anxiety

Dogs can experience different degrees of separation anxiety, some of which are not appropriate for daycare. If your dog has very severe separation anxiety, where he may literally have a panic attack, or shows other signs of severe hysteria, he cannot be consoled with the company of other dogs or humans. Placing a dog suffering from intense separation anxiety into an off-leash group environment will only worsen his state of mind. It should be noted that milder forms of separation anxiety can sometimes be relieved when a dog is introduced to daycare, as opposed to staying home alone.

Your Dog is Scared

Dogs in Daycare who are scared will usually sit as far away from the playing dogs as possible, generally by the fence, and will look in the other direction. If another dog approaches, they are often terrified. Sometimes dogs have a predisposition towards being fearful, other times it is learned behavior from something in his past. Fear of other dogs and/or fear of new surroundings creates extreme stress. Fearful dogs will most likely find a group of off leash playmates extremely intimidating and scary. They may cower, tremble, drool, pant, tuck their tails, etc… It’s very sad. Compassionate behavior modification is recommended, not because he’s being “bad”, but just for his peace of mind.

By “inappropriate”, we are not inferring that your dog is being “bad”. The inappropriate play we are referring to may be nipping, body slamming, even excessive humping. Even that sounds bad, but dog play is normally rough looking to someone who doesn’t understand dog behavior. Their normal play usually mimics fighting. Your dog’s play style could be indicative of his breed; for example, a herding dog, i.e., Border collies, Australian shepherds, etc., are “nippers” by nature. They are not showing aggression by nipping… that’s just what they do! Almost every dog breed was bred to do something or need a job to do. Breeds such as German Shepherds are working dogs who need a job to do. Sometimes in a group play environment they like “policing” other dogs and herding them. They love to get-in on the action and sometimes that can be too much for a group environment. This is why our Orientation process is so important. We use that first visit with your dog to see if it is a good fit for their personality.

Inappropriate play could also be because he has not been around a lot of other dogs and has not learned to play “politely”. They just don’t know “how” to play.

Many dogs hump or mount occasionally, and it can cause problems in a playgroup. It becomes troublesome when it is excessive. It is believed that some dogs hump as an inappropriate play invitation. Humping on its own is not a reason not to be uninvited from daycare, however, excessive humping, or humping combined with other possible aggressive-type of behavior is a reason. Humping can cause dogs to escalate negatively which can lead to dangerous behaviors. Many dogs do not want to be dominated in this way and will attempt to “correct” the dog for engaging in this behavior.

Not Every Dog is a Good Fit for Doggie Daycare

If a dog is not removed from daycare for any of the above reasons, these behaviors could possibly lead to aggression. An otherwise docile but fearful dog may act out. An overstimulated dog could become snippy. It’s best to remove the probability of a defensive action before it occurs.

Daycare is a happy place. We want all of our guests to be happy and safe while playing. Unfortunately, that requires that we deny attendance to some very sweet, loving dogs whose personalities are not a match for the vigors of Daycare. We don’t want to uninvite your dog from daycare, but if your dog is unhappy, attempts to make him conform are just plain mean. Could we condition him to conform? Maybe, but if we place our pets in an environment that they do not like, we do them a great disservice.

If you have a dog that just doesn’t do well in the Camp environment, we have a great alternative! Holiday Barn Pet Resorts offers a “Staycation”! A Staycation can be all the fun of a vacation, without ever leaving town! It’s perfect for dogs that get cabin fever when left at home all day. During their stay, we offer one-on-one playtimes with our staff, swimming, walks, and many other amenities to make their day fun. You can drop them off in the morning before work and pick them up on the way home that evening. Paw-fect!