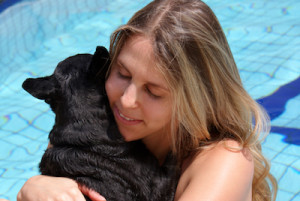 It’s becoming more and more prevalent these days… people are choosing not to have children and instead, are filling their homes with the pitter-patter of little paws!

Many women, including several pack members here at the ‘barn, will argue that they love their dogs (or pets in general) as much as someone else loves their human child. “I am consumed with motherly instinct and love when holding and caring for my dog”, says one pack member. “She is my baby…I love her!” Is that possible? Scientists have very recently concluded that yes, it is very possible… And guess what? Dogs love us like a human baby loves his/her parent too! Of course, we dog lovers already knew that, but we’ll go ahead and give the scientists some credit…

Picture a mother holding her baby… The baby and the mother are both lovingly engaged in gazing into each others eyes. This gazing releases oxytocin, the “feel good” hormone, which plays a primary role in the bonding between a mother and her child. Researchers have concluded that this type of gazing between a person and their dog ALSO increases oxytocin in the same way.

Are you familiar with oxytocin? Oxytocin is sometimes nicknamed the “cuddle” chemical, or the “love” chemical because it promotes bonding in people. It acts as a chemical messenger and is important in human behaviors including recognition, trust, and mother-infant bonding. When we hug or kiss a loved one, oxytocin levels soar. Oxytocin is also present in our pets and other animals and it’s role in the body works similarly as it does in humans.

We relate to our dogs very much like a parent relates to a child. We treat them like human children…we talk to them, we cuddle them, we buy them things, dress them up, have birthday parties for them, we have pictures of them on our desk… Likewise, they look to us as a parent…they come to us when they are hurt or scared, they depend on us to teach them right from wrong, they need love from us. Their lives are so very important to us.

I am reminded of an article I read one time about “Generation Rex” (Isn’t that a great play on words?)…cleverly citing that many women in this generation have chosen to have dogs over babies. Human births are on the decrease, while pet ownership has increased. So if you were secretly concerned that the maternal feelings towards your 4-legged child were less than “rational”, fear not! Turns out it’s scientifically proven!