Head of the Pack 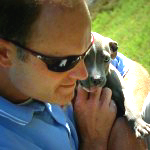 Michael Hughes has been in the pet business as long as he can remember! Michael is a graduate of Randolph Macon College. He successfully ran our Invisible Fence dealership for 13 years before it was sold to Invisible Fence of Virginia. Michael is now the “Head of the Pack” for Holiday Barn Pet Resorts. You are likely to see him at one of our locations helping our Pack, our guests, or one of our customers. Michael enjoys seeing the Pack develop as we strive to deliver on our mission of “Creating Joy in the Lives of Pets and their Families.”  Michael is an accomplished retriever trainer and is the proud owner of Lucy and Trapper, yellow Labrador Retrievers, and Tucker, a designer dog adopted from the Richmond SPCA who’s only job in life is to be cute. In addition to working at Holiday Barn, Michael enjoys being involved in the community and is currently serving on the Richmond SPCA Board, the Greater Southport Business Association Board, and the ChamberRVA IMPACT Committee. Michael has previously served on the CMoR Board, as the IMPACT Committee Chair, and on the St. Michael’s School Board. 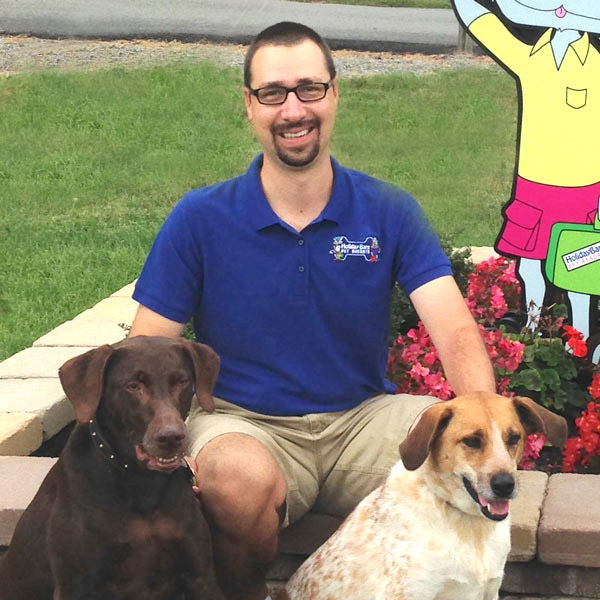 Ryan is the Resort Manager at the Glen Allen Resort. He joined the Holiday Barn pack in May of 2014 as the Pet Care Manager. Ryan has been working closely with animals of many types since graduating from University of Wisconsin-Platteville in 2001. He has worked in a variety of animal settings, most recently as the Medical Services Manager for a shelter in Madison, WI. Ryan is very excited to have joined such an amazing pack and to play a role in ensuring all our guests receive top-notch care and services. Ryan and Dexter (weimaraner/lab mix) enjoy exploring a hiking trail and enjoying the beautiful Virginia weather.

Resort Manager at South of the James Resort 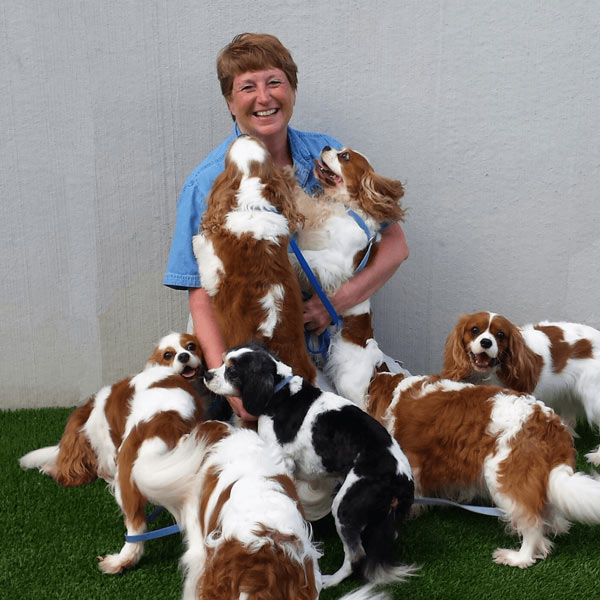 Glenda is the Resort Manager at the South of the James Resort. Glenda joined Holiday Barn in 2002. Glenda is owned by her Cavalier King Charles Spaniels and is a member of the AKC Cavalier King Charles Spaniel Club. As an owner she handles her champion dogs in AKC Conformation dog shows. She is a Certified Pet Care Technician. Glenda serves on the advisory board for Hermitage Technical Veterinary Science program, and is the National Fundraising Director for the ACKCS Rescue Trust. Glenda has over 20 years experience in executive and management positions in the corporate world. She now has the “most awesome job of her life” that allows her to do what she is most passionate about — working with pets and people in a customer service and quality focused environment. 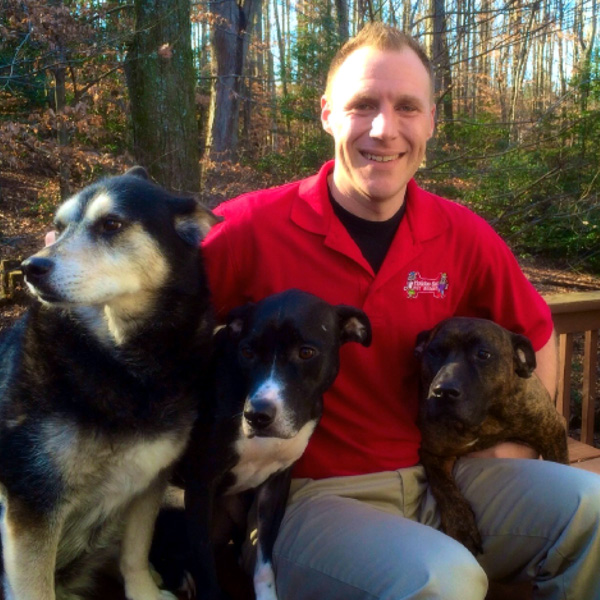 Dan is the Customer Experience Manager at the Glen Allen Resort. Dan joined Holiday Barn in 2014 after a decade managing a design and product development company. Born and raised in California, Dan always knew he wanted to live on the East Coast after a field trip to DC in middle school. He eventually made his way to Richmond in 2004 after graduating from Antioch University Santa Barbara. Dan is a proud supporter of Ring Dog Rescue and is thrilled to have found a career where he can indulge his passion for all animals, especially dogs. Dan has two rescue dogs (two pit mixes named Cinder Oi!) who he loves to spoil.

Schylar Postle is a Professional Dog Trainer with over 15 years of training experience. Growing up with a leash in her hand, Schylar started training her first puppy at the age of four under the watchful eye of her father, Jeff Postle, a Training Instructor at The Tom Rose School in St. Louis, Missouri. At the age of eight Schylar trained her second dog to compete in AKC obedience receiving her first CD title with two first place finishes and a third place finish. Not only did Schylar spend her childhood at The Tom Rose School, but from an early age she assisted in countless training demonstrations, group classes and assisting owners in training their pets. Before relocating to Richmond to further her training career at Holiday Barn Schylar trained dogs for K9 America in St. Louis, Missouri. In her spare time Schylar enjoys training her own dog Margo, a Belgian Malinois, in various levels of obedience and dog sports and exploring her new surroundings. She looks forward to helping Richmond area dogs (and their families) live happier, healthier, more balanced lives!

Dog Trainer at South of the James Resort 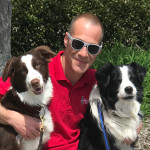 Dickie Martinson is a Professional Dog Trainer with 10 years of professional experience. Growing up he always loved animals and loved having a variety of different pets at home. It wasn’t uncommon for Dickie to bring home animals to keep. He decided to take his passion for animals and make it his career. He attended Tom Rose School in St. Louis, Missouri where he received his Professional Dog Trainer certificate. He began his career at Happy Hollow Pet Lodge in Ozark, Missouri where he trained police K9’s for four years. He continued his career by starting his own company Camp Aussie Posse and ran that for six years. At Camp Aussie Posse he specialized in the rehabilitation of dogs with aggression or fear issues. Dickie is devoted to using his training skills to enrich the quality of life for both dog and humans. 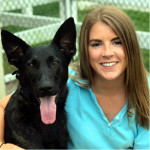 McKenzie Dewar is originally from Goochland, Virginia. She grew up around animals and took on work at a young age pet sitting for family, friends and neighbors. She attended the University of Virginia and received a Bachelors degree in Psychology. She then worked as a dog walker and pet sitter in Richmond for 3 years. She graduated from National K9 School for Dog Trainers and received her certification as a Professional Dog Trainer with endorsements in obedience training, behavioral counseling, puppy development, and customer relations with dog owners. She also received endorsements in retrieval, owner protection, assistance dog training, tracking/trailing, scent detection, and basic police K-9. McKenzie is a member of the International Association of Canine Professionals and the National K-9 Dog Trainers Association.

Dog Trainer at South of the James Resort 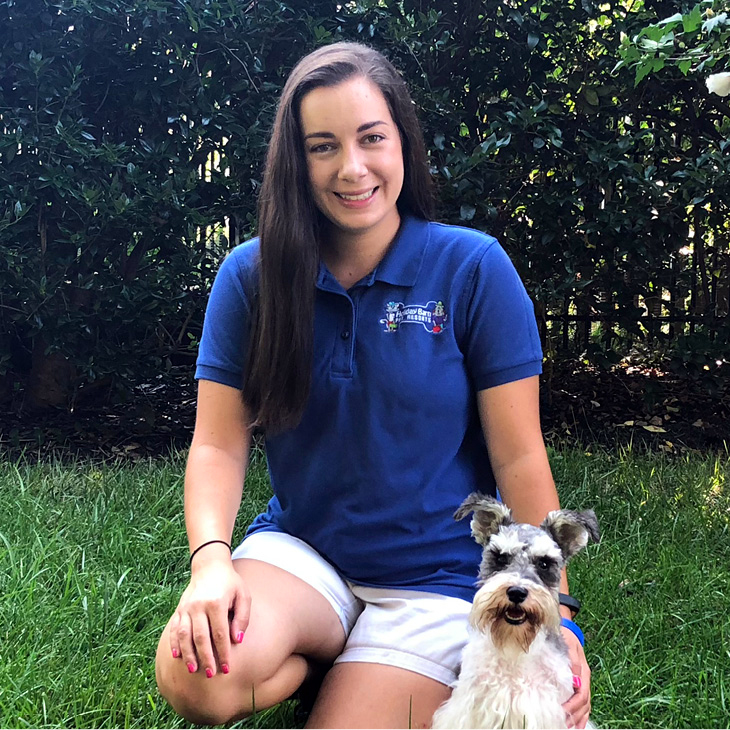 Melaina Russell joined the Holiday Barn pack in August 2015 as a member of the Customer Experience team. Shortly after she was promoted to the Customer Experience Coordinator at the Glen Allen location. She grew up in Richmond, VA and graduated from James Madison University with a Bachelors degree in Business Management. After working at Holiday Barn for three years, she had the opportunity to attend Tarheel Canine School for Dog Trainers where she received her certification as a Professional Dog Trainer. She is now at our South of the James location helping pet owners with their dog training needs and ultimately helping them achieve stronger bonds with their dogs. When she’s not training dogs at work, she enjoys training her Miniature Schnauzer Rory in agility, obedience and barn hunt. 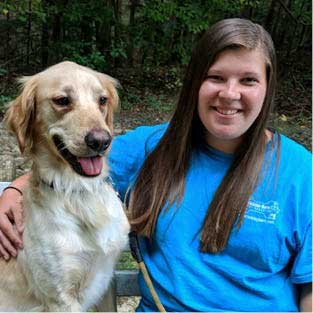 Stephanie Hicks is the Daycare Manager at the Glen Allen Resort. She joined the Holiday Barn Pack in July 2019 as the Daycare Coordinator and was promoted to the Daycare Manager in September of 2019. Stephanie grew up in King William, VA and graduated from Longwood University with a Bachelor of Science degree in Business Administration with a concentration in Management. She has previously worked at two other boarding facilities over the past seven years in both Virginia and North Carolina as the Kennel Manager and Operations Manager. Growing up with animals, Stephanie always knew she wanted to make a career with them. When Stephanie is not leading the camp pack, she enjoys going on long walks with her dog, Beetle, a golden retriever rescue, as well as competitively riding dressage with her horse Kitt Carson.

Day Care Manager at South of the James Resort 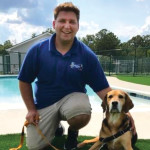 Zach joined the Holiday Barn pack in May 2017 as the Day Care Coordinator and was promoted shortly after to Day Care Manager in July 2017. Zach grew up in Hanover, Virginia and graduated from Virginia Commonwealth University. While attending college Zach worked at Kings Dominion as an Operations Manager and volunteered at the SPCA. Zach previously worked at two different boarding facilities in Atlanta, GA and Lynchburg, VA where he developed his skills and experience with animals. After working in Atlanta he realized he wanted to pursue a career with animals. When Zach isn’t in the yard with all of the Day Campers, he enjoys hiking and attending festivals in Richmond. Zach has an Australian Shepherd who he takes to agility class and a Hound mix named Moses who loves to relax with Zach on his days off. 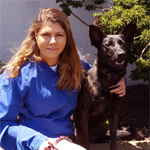 Danielle grew up on the Jersey shore and worked on the floor of the Commodities Exchange in New York for 12 years prior to moving to Richmond. Before joining the Holiday Barn pack she worked in Veterinary Medicine. When asked what she likes the most about working at Holiday Barn she said she really enjoys the relationships and bonds that she forms with our clients and their pets. Danielle has two adorable adopted Yorkie mixes named Mae and Zoe. They love to cuddle and when she is not taking care of the pets here at Holiday Barn they are always at her side!

Pet Care Manager at South of the James Resort 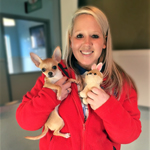 Mary has been with Holiday Barn since 2011 and became Pet Care Manager for our South of the James Resort in 2014. Virginia has a hold on Mary… she was born in Northern Virginia, but grew up in Des Moines, Iowa, and then returned to Virginia and attended VCU. Throughout college, Mary did English as a Second Language (ESL) volunteer work with students in Elementary school as well as adults, while also working at KOHLS. After graduating from VCU with a major in International Studies and a concentration in Latin American Studies, Mary continued working for KOHLS as part of their management team until she left to pursue a career and work full-time at Holiday Barn. Mary says that she loved everything about Holiday Barn from the moment she started, “I knew I loved animals but taking care of other people’s pets like my own became a dream come true.” Mary has two bad cats, Rucifor Ruford Rupert (a.k.a. “Bear”) and Baloo Boo Bear (a.k.a. “Little Man”), as well as a family dog, Diego, who’s the cutest Chihuahua on earth. 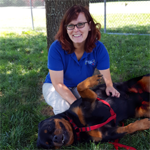 Katie has over over 20 years of experience in animal care. Katie originally joined the pack in January of 2000 as a pet care associate and went on to develop and launch our doggie daycare Camp Holiday Barn. Since then Katie has started a family and managed an award-winning animal hospital in Richmond. We are glad she returned to Holiday Barn in May 2018. After work, Katie enjoys spending time with her family including handsome Rocko (the rescue Rottweiler) and pretty Pineapple (a Parakeet). Katie loves all aspects of pet care and is excited to be back in the pack!

Grooming Manager at South of the James Resort 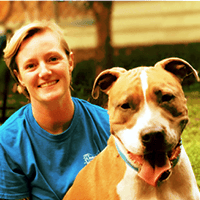 Beth’s very first job was at Holiday Barn when she was just in high school. Then years later, after college, she returned as she was preparing to leave for the U.S. Navy. She served four years as a SONAR Technician onboard the USS James E. Williams. After the Navy, she returned to VCU to graduate with a Masters of Strategic Public Relations. She has years of management experience and loves combining that experience with her love of pets. In her spare time, she enjoys volunteering for the Girl Scouts as a Troop Leader. She is owned by her dog Henry and cat, Saoirse.