We are lucky to have so many Australian Shepherds come visit us at Holiday Barn Pet Resorts! Both of our… 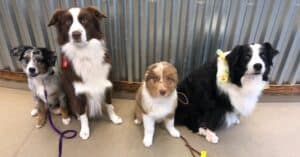 We are lucky to have so many Australian Shepherds come visit us at Holiday Barn Pet Resorts! Both of our Professional Dog Trainers in Midlothian own Australian Shepherds. Dickie’s dogs, Kemper and Chappie, and Zach’s dog, Atlas. All three work as “training assistants” to their dads. They are so smart. Chappie can do just about anything, from pushing a wheelchair to jumping rope to doing handstands. He is just awesome.

Certainly the Australian Shepherd is one of the most popular breeds these days, and it is easy to see why. Primarily known for their energy and intelligence, the “Aussie” also has to be one of the most beautiful of all dog breeds.

Aussies have a unique appearance

As seen in the above picture, these gorgeous pups come in 4 main colors: Left to right: Blue merle, solid red (liver), red/liver merle, and solid black, all with copper or white markings. Kemper (far right) is black with white markings. Chappie (second from left) and Atlas are liver with copper markings. The merle, as in the two smaller pups, is a dazzling mottling of colors.

What most people notice first, however, are their striking eyes which come in many different colors. In our picture, we see mostly amber and dark brown eyes, however, you may also see green, hazel, pale gray, or stunning icy blue eyes. Sometimes an Aussie’s eyes are heterochromatic – often having various colors in one eye! Years ago, the Native Americans called the lighter-eyed Aussie’s “ghost-eye dogs”. They thought the pale eyed Aussie was somehow sacred.

Where did the Australian Shepherd come from?

I have read several different narratives of where the breed comes from. Interestingly enough, they did not come from Australia! There are many accounts of a Spanish origin. The story is that Spanish shepherds brought them to the United States via Australia, and we, therefore, refer to them as Australian Shepherds. There is another school of thought that the breed developed from a “German collie” (or, Koolie, aka Coolie). Ironically the “German Collie” is not from Germany but from Australia. Some maintain that the name “Australian Shepherd” came from the fact that the dogs herded Australian Merino sheep in Germany. Confused yet? Me too. Americans believe that the breed originated in the Western United States in the 1800’s where they were used to work sheep and cattle. The truth is probably some combination of all these stories.

That makes us wonder what breeds make up the Australian Shepherd… English sheep dogs? Cattle dogs? I see Border Collie… Or maybe a mix of all – and others? We may never know for sure. Regardless of their origin, the Australian Shepherd has an undeniable reputation as a working dog, so they certainly came from a working stock. Although we have domesticated the breed – and often find them content to lounge at our feet – they are still used in parts of the US for herding cattle and sheep.

The Aussie is a natural competitor

Aussies successfully compete in many dog sports like confirmation, obedience, and agility. Chappie and Atlas most always place in “Dock Diving” competitions. And Chappie is like “greased lightening” during “Fast Cat” events! Aussies have been clocked at an unbelievable 40 miles per hour! They are very agile dogs and absolutely amazing to watch. Aussies also perform admirably as service dogs, whether it be therapy, rescue missions, or police work. Whatever they do, they approach the challenge with enthusiasm and learn quickly. Truly they are a most versatile breed.

How big do Australian Shepherd’s get and how long do they live?

Male Aussies usually weigh 55 -70 pounds. Their structure is somewhat masculine when compared to the smaller, more feminine female. Females generally weigh 35 – 55 pounds. They’re smaller, but just as strong. It is noted that an Australian Shepherd usually lives 12 – 15 years, although it seems that they are living longer now-days.

The Australian Shepherd breed was recognized by the AKC in 1993. The AKC describes the Australian Shepherd as an “intelligent working dog of strong herding and guarding instincts. He is a loyal companion and has the stamina to work all day. He is well balanced, slightly longer than tall, of medium size and bone, with coloring that offers variety and individuality. He is attentive and animated, lithe and agile, solid and muscular without cloddiness. He has a coat of moderate length and coarseness. He has a docked or natural bobbed tail.” Since the AKC recognition, the Aussie has become increasingly more popular in the United States.

Aussies are good natured. They have a confident, well balanced disposition, and rarely exhibit aggressiveness. They are extremely devoted to their families and adapt well to children. They are easy to train and eager to learn. Aussies are protective of their family and can be territorial.

Mental stimulation is very important to an Australian Shepherd. It is not a good idea to leave them alone with nothing to do for long periods of times. Because they are a working breed, they need to be kept busy. Their brilliant minds are always “on”. We recommend puzzles, games, teaching tricks, obedience, and just conversation to keep their mind engaged. Bring them to Holiday Barn Pet Resorts for some Enrichment exercises. They love challenges. A lack of mental stimulation will cause an Aussie to become bored. Boredom can result in destructive behaviors.

Professional Dog Training is a must, or else they will decide. I read an article that said an Aussie will actually find ways to create chaos in order to have something to do! The example in the article was by a lady who said her Aussie caused disarray among a group of calm sheep, stirred them up, so that he could herd them all again! Too funny! Dickie often says his Aussies are too smart for their own good… Now we know what he means. Aussies are bossy, self-reliant, and controlling. They need a clear, strong leader. A good Aussie leader must learn to “channel” their dog’s exceptional instincts with Training.

Aussies can be somewhat reserved upon meeting strangers but are never shy. I recall meeting Chappie for the first time. I was disappointed that he didn’t make over me immediately because I so desperately wanted to hug him. He didn’t shy away but he had to warm up to me. At some point, I guess he realized I was probably okay since I was a friend of his Dad. He sat a little closer to me and allowed me to love on him, but I can’t really say he returned the affection. I have since read that most Aussies are not really interested in affection from strangers but are affectionate only with their family.

Caring for the Australian Shepherd

An Aussie’s hair is short and smooth on its head, and generally on the ears. Their forelimbs are smooth, but they have feathers on their elbow and thigh areas. They have a double-layer, waterproof, straight to wavy coat that needs regular brushing to look its best. Holiday Barn Pet Resorts’ Midlothian Grooming Manager, Beth, says ” Australian Shepherds will need a good brush-out once or twice a week, more if their coat is dense. How can you tell if it is dense? See how easy it is to get down to the skin-level with a brush. Also, is the hair a different texture closer to the skin? That might be the undercoat ready to be brushed out, and a sign that the Aussie has a denser coat. We recommend a bath at least once a month with a conditioning treatment to keep their coat soft and shiny. Holiday Barn Pet Resorts offers shed-reduction treatments which include extra brushing and a specialty shampoo and conditioner to help loosen the undercoat. A quarterly shed reduction treatment is important to maintaining the coat in all seasons.  Double-coated breeds do best with shed-reduction treatments and brushing- never shaving.  Neatly trimming the rear end, legs and flanks can be done with scissoring, avoiding damaging the coat overall.”

Good nutrition is key for this energetic pup. Active dogs like Aussies need about 25% or higher protein from their food. Their food should also have a slightly higher than average fat content. Don’t worry, they will burn it off. They need essential fatty acids to not only supply energy, but to keep their coat shiny and vibrant. Feed them a high-quality food specifically formulated for active breeds. And, of course, make sure their food carries an AAFCO statement of nutritional quality.

Is an Australian Shepherd right for your family?

An Australian Shepherd is a great dog for an active family. They need lots of exercise and must be kept occupied. The family that enjoys outdoor activities will find the Aussie to be a perfect fit. Does anyone in your family run or jog on a regular basis? An Aussie would love to accompany them! This breed is all about being included and interacting with their family. If there is no designated activity in a day, a minimum of at least two good walks should be scheduled, totaling 1 – 2 hours.

Australian Shepherds are primarily good with children and other dogs. They may be too high energy for the family cat, though. It is unlikely that the dog would intend to hurt the cat, but the cat may not understand the dog’s play habits. Plus, they will try to herd the cat and that might not go over too well.

We mentioned that Aussies are wary of strangers, so socialization at a young age is important. It is not an option. Because of their guarding tendencies, Aussies that are not properly socialized can respond negatively to what they may consider a threat to their people and possessions.

An Australian Shepherd is a loving dog and can be the perfect family pet. They are loyal and thrive on companionship. As mentioned, they are also very affectionate with their family. An Aussie that is involved and included in his people will bring great joy to the family. Yes, they do have down time and cuddle time. They can be silly and entertaining too. Aussie owners say they’re the best dog they’ve ever had!

What’s that Smell? 8 Reasons Why Your Dog Might Smell Bad

Have you ever heard someone say that something “smells like a wet dog”? Poor dogs… they get blamed for any…

FETCH! The good and the bad

Like baseball for humans, fetching a ball has to be the great American pastime for dogs! I mean, one of…