One of the best things about living in our area is the ability to day-trip to the beach, whether it’s…

One of the best things about living in our area is the ability to day-trip to the beach, whether it’s Virginia Beach or the Outer Banks of North Carolina! I-64 can be a challenge sometimes, but we can usually get to the shore in a couple of hours. Another great thing is that dogs are allowed in Virginia Beach all year round, even though their hours are restricted from Memorial Day through Labor Day.

Dogs love the beach! There is something about the wide-open spaces and the splashing waves that is so exciting for them. We want them to have a good time, but we need to be aware of some potential dangers that the beach and sand can introduce. As conscientious dog parents, we are all aware of the hazards of heat, exhaustion, and strong water currents for our dogs, so let’s talk about some of the lesser-known dangers your dog may face during a day at the beach.

For several years in a row, we visited one particular beach in North Carolina. We could always count on seeing an old man walking his cocker spaniel up and down the beach every day. He was a friendly man and we looked forward to talking to him and loving on his sweet dog each year. One year when we visited, we didn’t see him. We asked the hotel owner what happened to him. He said that the dog struggled with sand spurs so they had to quit their daily beach adventures. It’s easy to see how that could be a problem. Cocker Spaniels tend to have a lot of hair on their feet, and sand spurs are notorious for attaching to hair.

Anyone who has walked barefoot at the beach has surely encountered bur-grasses. Some people call them sandburs or sand spurs. They are little seeds with tiny spikes and can be very painful if stepped on. Imagine all the little crevices in our dog’s feet and how those burs can push their way up between the pads. Not only is that painful, but if not removed, can cause lameness and infection.

If you walk your dog on the beach, it would be helpful to carry tweezers so that you can quickly remove any spurs that have attached to your pup. If your dog begins limping, check for sandburs between their pads. When you leave the beach, check your dog out carefully, paying close attention to paws, armpits, tail, around their faces, and in their ears. Sand spurs are nasty little buggers and they latch onto anything and everything.

Just this past week, I read an article in People magazine about a family whose 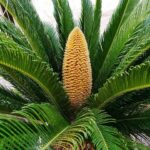 dogs ate the seeds from a Sago Palm in South Carolina. The family thought their dogs were chewing on crab apples (which are also toxic to dogs, but not to the degree of a sago palm seed). Minutes later their dogs started vomiting uncontrollably. After a call to the nearby Veterinarian Critical Care, the family rushed their dogs to the animal hospital where they immediately started receiving treatment. Those poor pups!

Sago palms are not technically palms, but they look like them and make for beautiful tropical-looking landscaping at the beach. Sago palms are grown in Virginia because they are hardy against cold weather. Unfortunately, these common plants are poisonous for dogs, cats, horses and people to ingest. The ASPCA states that ingesting Sago palms can cause vomiting, gastrointestinal bleeding, jaundice, increased thirst, hemorrhagic gastroenteritis (sudden vomiting and bloody diarrhea), bruising, coagulopathy (preventing the blood from clotting), liver damage, liver failure, and death.

The first time you take your dog to the beach, they have to taste the water, right? And that usually puts an end to it when they realize that it’s not the same stuff that is in their water bowl. However, a dog can unintentionally ingest a lot of saltwater by fetching, swimming, and playing in the water. While ingesting a very small amount of saltwater may only present mild intestinal issues, too much can cause saltwater poisoning, which can be fatal.

Salt draws the water from your dog’s blood and into their intestines. At the least, it will cause mild dehydration. At the most, it will cause diarrhea, vomiting, and severe dehydration in dogs. When too much salt is consumed, our body’s cells will release their own water to try to counteract. This will throw everything out of balance, causing seizures, loss of brain cells, and kidney damage. According to the AKC, dogs with toxic levels of sodium in their systems have a mortality rate higher than 50%, regardless of treatment.

A few years back, one of our Glen Allen pack members, Erin, experienced salt water poisoning in her dog, Maya, while at the beach. According to Erin, Maya had extreme diarrhea. “It was scary. We were nowhere near a vet and didn’t realize how dangerous it could have been for her.” Luckily Erin was able to rehydrate Maya and prevent further damage. Erin’s advice to others is to know where the closest vet is when you are visiting a dog-friendly beach. The sooner you can get treatment, the better.

There was an article in the Virginian-Pilot last summer saying that “something rotten is in the air at the Oceanfront.” A tropical storm had ushered in a nasty algae bloom. It stunk and caused the water to turn a brownish-red hue. The Virginia Department of Health identified the algae as “margalefidinium polykrikoides.” They assured people that it was not toxic to humans, but nothing was mentioned in the article about its effects on pets.

Margalefidinium polykrikoides is a species of “red tide.” Whenever a red tide algae bloom is present, officials from other beach locales warn people not to let their dogs on the beach. When an overgrowth is present, it releases toxins that can cause illness in dogs and humans. If your dog ingests a sufficient amount, it can cause neurological problems. Whether or not the specific algae along the Virginia shore was “potent” enough to cause illness, we do not know.

Fortunately, red tide is not as prevalent in Virginia and North Carolina as it is further south, the Gulf of Mexico, and in other countries. Admittedly, I am not an expert on algae blooms or red tide. Regardless, I would not want my dog near water that is badly colored and smells bad. If you are at the beach with your dog and detect an unpleasant odor, I would advise that you rinse your dog with fresh water and leave the area. Then contact the Department of Health in your area to find out more.

5. Seagrass Wrack on the Beach

I’m sure you have all visited the beach when piles of seagrass lined the beaches. I know… it’s ugly, it stinks, and it’s a nuisance, but it is a vital part of the marine ecosystem and benefits our atmosphere in ways too numerous to list. Regardless, it’s not pleasant to look at or walk through.

The problem is what could be in the seagrass wrack. As it comes ashore, it brings with it not only seagrasses, but remains of dead sea animals, trash – like rotten food, sharp objects – such as fish hooks, needles, broken glass, shells, dead jellyfish (they can still sting after they’re dead!), crabbing gear, crustaceans, netting, mammal carcasses, and all kinds of nasty stuff that your dog should not get into. The longer sea grass sits on the beach, the nastier it becomes, as bacteria, fungi and other microbes are hard at work breaking it down. It’s just gross.

A few years back, there was a story in the news about a 4-year old golden retriever that was scavenging along the tideline, eating bits of washed-up dead fish and broken starfish. Although she was young and healthy, she became seriously ill. Her owners now caution other pet owners to be mindful of what their pets are doing at the beach. Officials advise beachgoers to keep pets under “close supervision” while walking at the beach. They warn, dogs should not “eat anything washed up on the shore, as some dead animals can be toxic to dogs.”

Crazy, but true, some dogs eat sand. As a dog lover, you are probably aware that some dogs eat anything – cell phones, rocks, shoes… so why not sand, right? Sometimes it is just an accident. When a dog’s fetch toys and balls are covered with sand at the beach, or they lick their fur after being covered with sand, or they dig in the sand and it gets all in their mouth as they pant, sand can be unintentionally consumed. If you visit a sandy area with your dog, it is possible that they can end up with sand in their belly for any number of reasons.

If a dog swallows a lot of sand, it can cause a blockage in the intestine. It is called sand impaction. It is serious and requires an urgent visit to the veterinarian emergency clinic. Signs that your dog may have accumulated too much sand are vomiting, abdominal pain, restlessness or lethargy, and dehydration. Unchecked, it can be fatal. Prognosis is promising if treatment is carried out promptly.

All that said, sand impaction is rare. Nevertheless, it can happen and it’s one of those things that we would never wish our dogs suffer through.

They say, “an ounce of prevention is worth a pound of cure” and this is a great example. We need to monitor our dogs closely when they are at the beach, preventing them from eating things they shouldn’t be eating, drinking what they shouldn’t be drinking, and making sure they don’t get into something that could potentially cause them to be sick or even die. An emergency veterinarian visit can ruin an otherwise beautiful day at the beach.

In fact, a better idea is just to bring your dog to Holiday Barn Pet Resorts for a Staycation while you head to the beach! Instead of the sand and saltwater, we can treat them to fun play activities outdoors, a refreshing swim and game of fetch in the pool, or a little pampering at our spa! Then they can cool down and nap in their air-conditioned suite, safe and content. They will never know – or care – that you sneaked off to the beach without them!

How to Trim Your Dogs Nails

Nail cutting or trimming is probably the least popular pet care task we need to do. We fear we will…