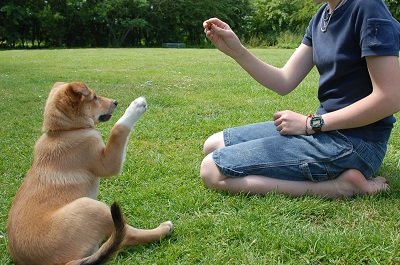 So you have a new rescue… or maybe not so new! Congratulations, and thank you for giving hope and a home to a dog who needs you. Your rescue probably has a few years under his/her belt… experiences you will never know. When you think of a rescue, you often think of their years on this earth thus far as having been neglected, but that’s not always true. He/she could have had a good family or guardian who, for whatever reason, had to give them up. Your dog may know some pretty neat things that you’re unaware of… some tricks, some cool commands he understands, or he may have even been professionally trained at some point in his life. What does he know and how can you find out?

Observation Will Teach You a lot About Your Rescues Habits

Spending time with your new rescue is important on so many levels. In the beginning, just being with him is all he really wants as he learns about his new world. Watch him… see how he responds to things. Basic life needs like feeding can give you clues about what your dog knows. Does he jump around when you put down the food bowl excitedly trying to get to his food, or does he purposely sit and look at your face as if awaiting a command that it’s okay to eat? More than likely, a dog who sits when being fed has been taught some basic manners.

Figure Out if Your Rescue Already Knows Commands

It’s easy to try some basic commands. Start with “sit”. Easy enough. Other basic commands are “stay”, “come”, “down”, maybe even “heel”. Take it slow and don’t try more than a couple of commands in one session. Try using treats to get his attention and then start asking commands to see if you get a response. Your new fur-child may know some way cool tricks too. That’s a little harder to nail-down, but observe your dog’s actions and reactions and you may be surprised. He may roll-over for you some day, or reach up to give you a high-five! Maybe try dangling a treat above his head and see if he will sit-up in the begging stance!

Professional Dog Training For Your Rescue

The first time our Holiday Barn Pet Resorts Dog Trainer met my new rescue, she spent some time talking to him and studying his behavior. When offered treats, his response was to twirl around in a circle. My little rescue knew how to “dance” on command! Spending time with a professional dog trainer can help determine what manners or basic obedience your dog knows, as well as “clean-up” any unwanted behavior that he may be exhibiting.

Just recently while walking my dog, I said, “Let’s go home”, to which he immediately looked up at me, turned, and headed back to our house. I’ve used that phrase several times since and he definitely knows what I am asking. Surprisingly, my dog didn’t know what “no” meant (he does now! Haha!), but he knew the word “stop”. He knows the command “wait”, but he doesn’t know “stay”. When he “heels”, he stays to my right side, as opposed to the “customary” left side generally used by trainers. He has no idea what “come” means, but we’re working on it! It’s been fun tapping into his world and finding out what he knows!