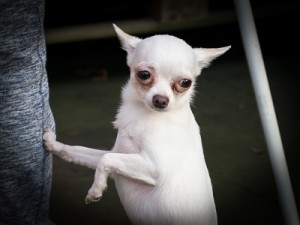 When we get a new large-breed puppy, we always think, “We’d better get that puppy in Training as soon as possible because when he grows up, we won’t be able to handle him.” It is often a different story when we get a small breed pup. We think that because he will still be small as an adult, we will be able “handle him”, and that we really don’t need to get professional training for him. I think that is a common mistake by many small dog owners.

I’ll bet you have some friends or neighbors with an annoying little yappy dog? You know the ones I’m talking about… As much as you love dogs, whenever you see the little “ankle biter”, it’s not at all enjoyable. He’s constantly yipping. He’s all over you… jumping on your leg and in your lap when you sit down… getting in your face. And how annoying is it when he’s licking your face repeatedly? You keep pulling him away from your face and he keeps coming back. It’s not cute. The one I find particularly irritating is the one who growls at you for no apparent reason, except that you’re in his house or that you are too close to his owner. You just never know if he’s going to snap at you or what! These behaviors, and many others are all typical for what we refer to “Small dog syndrome”.

Some of the behaviors that make up SDS include jumping (on their owners, on others and on other dogs), growling at other people or dogs, not listening to commands, acting nervous or even neurotic, constant or frequent barking, lunging, snapping, or nipping, demanding attention (affection, treats), etc. These behaviors can occur in any size dog but are more prevalent in smaller dogs.

We’ve all heard the term “Napoleon” syndrome, referring to Napoléon Bonaparte, a 17th century French emperor and military leader, who apparently was just over 5 feet tall, but was a force to be reckoned with. Because of his small size, over the years people have used the phrase “napoleon syndrome” or “napoleon complex” to describe someone who attempts to overcompensate for his size or stature. The term “Small dog syndrome” comes from its correlation to “Napoleon Syndrome”.

It is debatable whether small dogs who suffer from SDS literally realize that they are small. Are they acting the way they act because of a need to overcompensate for their size – like Napoleon? Or are they acting that way because, well, to put it in plain terms, because they’re spoiled rotten? Many Trainer’s believe that the behavior displayed with SDS is simply learned. We have allowed our small dogs to break all the rules… things we would never allow a big dog to do. And although we think we are showing love and affection by not correcting them and letting them to have their way, the result is that they are actually feeling very nervous, anxious and insecure.

How to “fix” Small Dog Syndrome

Here’s the good news… It’s not genetic and it can be “treated”. How do we undo what we have already done?

Here are a couple of suggestions for “untraining” your dog. First of all, don’t pick him up. Holiday Barn Pet Resorts Professional Dog Trainer, Schylar, says “Small dogs are so much easier to handle because we can simply scoop them up when they are misbehaving. Picking your dog up when they are barking at another dog, for instance, can be seen as a reward to your dog and make them feel that barking is a good behavior. If you are always picking your small dog up when they are misbehaving OR when they seem scared/insecure, you will only see more of that behavior occur.”

Next, teach your dog to start walking properly on a leash. I mean, fess up… You’ve been carrying him a lot, right? Dogs who walk on a leash are more confident and that’s something we need to develop. Put him on the ground and if he becomes frightened for any reason, resist picking him up, but stay close beside him so he has the assurance that you’re right there. If he takes a few steps on his own, reward him with his favorite treat. If he whimpers and jumps on your leg to be picked up, correct him by calmly and gently placing him back on the ground and proceed to walk with him. Schylar says, “Remember, we use praise and affection to reinforce good behaviors.” So when your pup responds to the behavior you like, reward him quickly.

Thirdly, establish yourself as his leader. Up to this point, he has been the leader and you have unknowingly reinforced that belief by your treatment of him. By avoiding picking him up and teaching him to walk properly on a leash, you will begin to establish yourself as the leader. Your dog needs a strong leader. Don’t be afraid to set boundaries and to firmly but gently teach him what is acceptable and what is not acceptable behavior.

We recommend you consult with one of our Professional Dog Trainers for help in breaking the bad habits that have been allowed to this point. Retraining your dog is not an easy task. With your Trainer’s help, consistent enforcement of good behavior, proper socialization, and establishing yourself as a leader, your little guy will make a huge improvement.