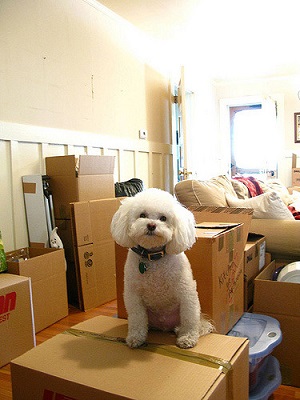 We are getting ready to move again for the umpteenth time and already I can tell that our nervous energy is rubbing off on Rex. We haven’t even started packing yet but he knows something is up. I’ve noticed he is a little more “jumpy” than usual, and he stays at my feet constantly. It’s kind of like when we pack for a vacation… Rex is there, sticking his nose into everything we do… literally. When we pack up his toys and bed, he raises those ears as if to say, “Hey, those are MINE!” Right now, he is excitedly watching my husband and I converse as if waiting for some kind of a cue or command. And we have a month to go yet! He has always been prone to anxiety, but he’ll be a nervous wreck by then!

Moving is hard on pets, dogs and cats alike. They’re not leaving just a house… it’s their domain. It’s going to take a little work on your part to get your dog used to a new place. And if you have a nervous-nellie like my Rex, you need to plan on spending some extra time helping him to adjust, and, understandably, “time” is at a premium during moving time.

There is a lot of good advice online about moving with your dog. Rather than rehashing the “logistics” of moving with your dog… like purchasing a travel crate, or making airline preparations, I would like to share some fresh thoughts and successes with you on how to make the transition easier on your four-legged friend. As I mentioned, we have moved several times and I have learned a few things along the way that have helped Rex adjust. In fact, I just may be an expert at moving dogs!

Here are some things that you can do to make your move more pleasant for your dog:

While we generally take this time to purge things from the house that we no longer need or want, it’s not a good time to throw out your dog’s old toys or worn bedding. As ugly (and smelly) as they may be, take them with you. He finds comfort in his old things. Once he is happy and settled in his new surroundings, then you can toss his old stinky bed and get him a new one!

Maintaining a bedtime ritual is very comforting to your dog, even if you find yourself in sleeping bags on the floor for a night or two! Take him for his nighttime walk and give him his usual treat before bed. Rex loves to lay against my side while I am reading in bed at night…it’s our quiet time. Keep up that ritual, even though you’re probably exhausted and would rather just crash.

In fact, try to keep as many “rituals” in place as you can during this time. Rex likes to chase a ball up and down the hall every morning after all his stretching antics. As busy as we are, I would rather skip the game of chase, get him outside, get him fed, and get to work! But that’s a bad idea. Take the time to do the things you would normally do. If you really think about it, it doesn’t take that long at all.

You may think I’m crazy, but I talk to Rex the entire time I’m packing and unpacking. Things like, “What do you think, Rex? Will this fit in that box?” “Oh, look how nice that looks there!” Blah, blah, blah. Silly? Yes! He doesn’t know what I am talking about, but my voice is comforting to him. It also gives him something to concentrate on rather than what’s going on around him. And make sure it’s “happy talk”. Positive, cheery, sort-of animated, sing-songy… you get the idea.

4. Don’t leave him alone in the house

Whether it be your “boxed-up” old place, which will feel foreign to him, or your new place shortly after moving in, it’s best not to leave him there alone. No matter how bad you and your hubby are dying to try out that little pizza joint down the street from your new place, your presence during this transition is important to your dog.

5. Leave your dog’s things in place

Leave his bed and toys in their spot in your old place until the last minute. I know… they’re in the way, but it’s just a little inconvenience, right? I notice Rex goes to his bed more often during all the commotion of moving. He must feel it’s a safe place. Then when you pack the car with him in it, make sure he has his bed and some toys with or near him.

Be careful not to leave the door open so that your dog can wander out. In all the chaos, it’s easy for him to get away from you. When movers are coming and going, or the door is propped open, put up a doggie gate in an area that will safely contain  him, yet still allow him to see all that is going on.  When that is not possible, I actually tether him to me… not tightly, but allowing him enough room to walk around yet not get in the mover’s ways.

7. Get Your Dog Settled first

Once you arrive at your new home, get your dog settled. The first thing we do when we get to the new place is pull out Rex’s bowls, bedding, and toys. We fill up his water bowl and give him a treat. Then in that same sing-songy voice, try to convey feelings of excitement and fun. As soon as possible, we walk him, on-leash, around his new yard and neighborhood.

I find that it’s much better to include Rex in all of our packing activity rather than confine him to another area of the house, even though he’s often underfoot. I’m not sure why, but he seems to be more “accepting” of everything that is going on if he is allowed to be a part of it. Maybe it’s the gradual introduction to “change” … who knows? But I’m sure you can see how putting him in another room, away from his family, hearing noises that he can’t explore… all of this would be 10 times more distressing for him than being allowed to be part of the action.

So I’m busy purging and packing a kitchen cabinet and it’s Rex’s walk time. My tendency would be to rush him out, and just as soon as I can, rush him back inside to finish my packing. This is when you need to purposely calm yourself. It’s not easy to do. I fight with myself to be calm while Rex is sniffing the same patch of grass for 15 minutes… If you don’t relax, he will pick up on your anxiety and it will only serve to make him more uneasy. Give him his normal walk time. Stay focused on him and his walk.

In fact, for your dog’s benefit (and yours!), work on calming yourself through-out this entire process. As we often discuss in our blogs, dogs are so in-tune to our moods, energy, and emotions. I totally understand… Your thoughts are “Did I call back the cable company? Was that guy coming to fix the dishwasher on Thursday or Friday? Did I put in the change order on my magazine subscription? Etc., etc., etc.” It’s hard to still your mind with so many things to do.

Hopefully, you have already established a relationship with Holiday Barn Pet Resorts and your dog is happy and content here. If you are going to have a particularly chaotic day – repairmen coming, carpet cleaners coming, etc.. bring him or her here with us.  It’s a fun and happy place. If you don’t have a relationship with Holiday Barn and you have a pending move, now would be a great time to get your dog accustomed to coming here. We have a wonderful daycare that will keep your dog entertained while you’re getting things done around the house.

Lastly, whenever possible, pat your dog or speak softly to him in passing. It’s comforting for him to be by your side, so invite him to lay near you while you’re packing. Rub his belly or stroke him when you have a minute. Just be with him. That’s what he really wants.

Leashes and How to Use Them

Seems trivial, but a leash is one of the most important tools you will use with your dog throughout his…

Not to appear arrogant or boastful, but we at Holiday Barn consider ourselves to be experts on belly rubbing. Yeah……