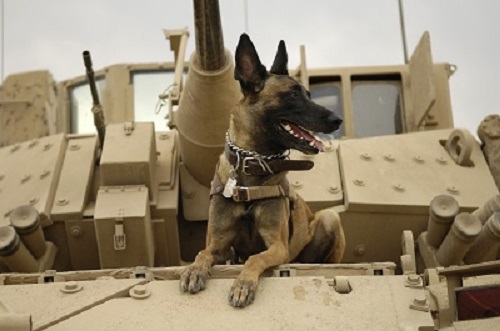 Because of our passion for dogs, each holiday honoring our military… Veteran’s Day, Armed Forces Day, Memorial Day… brings to mind our brave canine soldiers too. It’s clear to see why dogs are such an asset to the military. They have such an awesome sense of smell, useful for sniffing-out explosives as well as enemies. Their acute sense of hearing is helpful for avoiding being ambushed. Their size, endurance, athletic prowess… not to mention their loyalty and desire to please, are all valuable qualities in the making of a soldier.

It wasn’t until during WW2 that the US felt the need to “enlist” canines in the military. The government asked the American people to donate quality dogs to the cause and in response, received around 10,000*1 dogs! These dogs were sent to our first K-9 training centers in Front Royal, VA and Camp Lejeune, NC. Most of them were trained for “sentry” or guard duty. Within a couple of years, however, we started putting dogs in combat. When the first platoon of combat dogs and their handlers were dispatched, many laughed. Really? A dog? But it didn’t take long for these dogs to be taken seriously. They were brave scouts, worthy war-time companions, serious soldiers. Since that time, dogs have been used in every military conflict… Korea, Vietnam, Panama, Persian Gulf, Bosnia, Kosovo, Afghanistan and Iraq.

Clearly, some breeds make better soldiers than others. You’re not likely to see a maltese on the front lines. The German Shepherd and the Doberman became the “iconic” war dogs. Both are highly intelligent, easily trainable, obedient and tenacious. Other dogs that were found useful in the US War Dog program were the Belgian sheep dogs, farm collies and giant schnauzers. Today, the US Defenses rely heavily on Labrador retrievers and Malinoi.

As you can imagine, it takes a LOT of work to turn a domestic dog into a soldier. War dogs must learn all the basic commands like sit, heel, etc., in addition to serious military functions. Military dogs are taught not to bark when in combat situations, how not to freak-out over gun shots and explosions, they learn military hand signals, attacking on command, and other more specialized skills. It can cost up to $40,000 to train a dog for military duty! About 270 military working dogs per year are trained at Lackland Airforce Base in TX. Nearly all are trained for both patrol and detection (of explosives or narcotics).

Dogs in the military today are considered “fellow warriors” and get the same respect as any human soldier. They receive excellent medical and psychological care. They are fed well… one report suggests that an Army dogs’ food cost more per meal than our soldier’s rations! During active duty, they sleep with their handlers and enjoy constant human companionship. When their handler is on leave, they are kept in clean, well-protected kennels.

As the military dog’s career winds-down, some dogs go on to other federal agency work, while others retire to civilian life and are placed for adoption. Approximately 90% of them are adopted by military handlers, but there is a long list of civilians waiting to adopt. Isn’t that wonderful? All dogs deserve a good home, but I can’t think of one more deserving of a warm, loving family with whom to retire than one who has so courageously served our country.