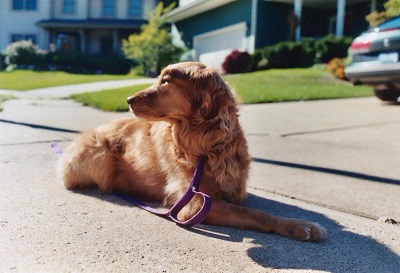 My neighbor opened his front door the other day to take his dog for a walk and within 5 feet stood a very large raccoon. The raccoon was intimidating…standing on his hind legs…refusing to move. To quote my neighbor, “This can’t be good…” and he shut the door and watched through the peep-hole until the masked bandit finally scampered off into the brush.

In the last 15 years, Richmond has experienced so much growth. Areas that just a few years back seemed like they were “way out in the country” are now home to shopping centers and housing developments. As a result, these areas once occupied by wildlife have been radically altered, leaving these animals to adapt and even possibly exploit their new environment. As it is our responsibility to protect our pets and keep them safe, we must be aware of the potential dangers that exist for them within our own communities.

Raccoons are a particular concern in our neighborhoods. You may remember just last summer a raccoon that attacked a dog in Henrico’s West End tested positive for rabies. In addition to rabies, raccoons can carry two other diseases that are hazardous to pets and people: roundworm and leptospirosisas. They have also been known to carry canine distemper. Raccoons will attack domestic animals, especially if they feel cornered, but generally will run from larger dogs.

According to an article by NBC12 in January this year,  the coyote population is on the rise in Virginia. Coyote usually hunt small mammals such as mice, vole, or rabbits, but small dogs and cats may be considered prey due to their similar size. Larger dogs may be viewed as potential competitors since coyotes are territorial. Besides the risk of rabies, this canine cousin can also carry distemper, hepatitis, parvo virus, mange, ticks, fleas and worms.

Just this past May, a woman was bitten while trying to protect her dog as he was being chased by a fox. Her dog also suffered bites. Nearby, a cat was also attacked by a fox. Unlike the coyote, a fox is most active during early morning. They too hunt small animals like rodents, rabbits and birds. “It is unusual for a fox to chase a domestic animal, especially a dog, and then also of course to come up to a person and then to actually bite them,” said Lt. Shawn Spears of Henrico Animal Protection Police.

Skunks are no strangers to our area. Although they are generally nothing more than a nuisance, a rabid skunk may attack. Skunks are more active during the dark, so it’s a good idea to check your yard before letting your dog out to do his business. Fortunately, unless you walk your dog at night, you probably will not confront one. Your main concern is to protect your pet from being sprayed. Spraying is not dangerous, per se, however, if sprayed in the eyes, it is very uncomfortable… not to mention the smell… Oh my goodness, the smell! Beware!

Have you noticed the surprising number of rabbits in our neighborhoods this spring? Rabbits are not considered a threat to our pets, even though they can carry rabies. However, the problem is that they naturally attract predators like fox, raccoons, hawks, opossum, and snakes… and all these predators can be dangerous when face-to-face with our domestic pets.

How to Protect Your Pets from Wildlife

There are some general precautions you can take to protect your pet from this influx of wildlife in our communities:

1) Don’t let your pet go outside at night alone. Take a flashlight and examine the yard before letting him out.
2) Don’t leave pet food or water bowls outside.
3) Keep your pets up to date on vaccines.
4) Keep your dog on a leash when hiking.
5) Steer your dog clear of heavy brush, bushes, and wood piles.

Your vet is your best source if your dog is ever hurt. He/she can help you to put together a first aid kit for your pet should anything happen. It is also prudent not to let your dog run at large. Be sensible, be safe, and be prepared.