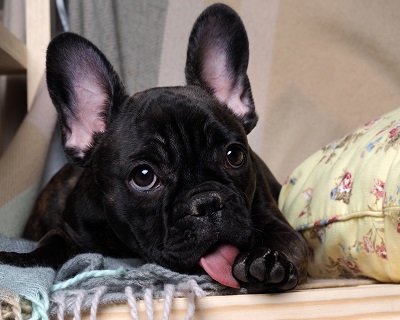 You’re trying to sleep and you hear the familiar rhythmic noises coming from your pup’s bed… “slurp, slosh, smack, chomp-chomp-chomp, slap, slurp…” All through the night… sloppy, nasty, incessant licking and chewing!! Aarrgh!!! I feel your pain! Can there be anything more irritating (especially in the middle of the night) than the sounds of an excessive paw licker?!? So we try EVERYTHING to get him to stop…. We think his feet must be itching or irritated so we give him an anti-histamine. That knocks him out for a while, but the licking and chewing quickly returns. We try bitter spray… and, oh dear… I think he likes it! Then we wrap his feet up and he spends the next few hours unwrapping, tearing, and ripping at the bandages … Then we try the dreaded Elizabethan collar, but we can’t stand those sad eyes peeking out from inside. It’s an endless battle. But before you throw another pillow at your unsuspecting pup, just think about how he must feel. Bless his little puppy heart…. Something must be wrong.

Is there a Medical or Psychological Reason Dogs Lick Their Paws?

You are right… Something is definitely wrong. Whether it be medical or psychological, excessive licking and chewing of paws is a problem…and not just because it keeps us up at night. Your poor dog is most likely suffering. Regardless of the reason, your pup thinks the only response is to lick. What a disruption to his quality of life.

I hate to be the bearer of bad news, but finding the cause of your dog’s constant licking and chewing is difficult, to say the least. AND even if you actually find the cause, correcting the behavior is going to be challenging, and sometimes impossible. Compulsive licking and chewing is actually quite common… and compulsive behavior is so hard to correct. Not only that, but it’s difficult to know if it truly is compulsive, or if there really is a reason behind it. It’s a vicious cycle, right?

Pack member, Dawn, struggled for years to find a solution to her dog’s licking. “Our beloved Doberman, JoJo, was an obsessive paw licker and we dealt with a lick granuloma on his right rear leg for over 8 years. According to our vet, certain breeds, including Dobermans, German Shepherds, and Weimaraners, are more prone to lick granulomas.

Although there are many theories for the cause of lick granulomas, we believe that in JoJo’s case it was out of boredom and possibly a little separation anxiety. We were never able to get the lick spot to fully heal… but we got close a couple of times by using an ointment, QuickDerm, then wrapping the leg with gauze, and then putting one of my husband’s socks on over it, which was wrapped firmly but not too tightly with medical tape. To keep JoJo from messing with the bandage, we wrapped a final piece of tape with the sticky side outward around the sock bandage and then rubbed cayenne pepper all over the sticky part to discourage him from chewing it off to get to his leg. It worked!”

The real problem is that all that licking and chewing is harmful to your dog. As in Jojo’s case, he developed a lick granuloma. Lick granulomas can be nasty. They start as a tiny sore spot which your dog begins to lick. As the licking continues, the skin becomes thickened and irritated. The next thing you know, your dog has a large, gaping sore. Your first line of defense is to see your vet!

If you’re one of the lucky ones, your veterinarian or veterinarian dermatologist will be able to actually pinpoint the cause of the licking. Be it an environmental allergy, a food allergy, fleas or flea allergy, mites, pain – as in arthritis (which will cause your dog to lick that area), a hot spot, or even a hormone imbalance, these are all treatable. Once a remedy is found, consistency in treatment is imperative to stop your dog from licking that area, and thus eliminating the possibility of that licking becoming habitual or obsessive.

What Can I Do to Prevent Excessive Paw Licking?

Sometimes the cause of excessive licking and chewing is behavioral, based on controllable circumstances. Is your dog bored? Try providing more chew toys or intelligence games. Does he have general or separation anxiety? There are exercises you can do to help him cope, as well as medications to ease the stress. Could it be as simple as dry skin? Although excessive paw licking isn’t generally a training issue, our dog trainers in Richmond, VA may be able to make some suggestions to help you and your dog cope. In addition, some people have found calming music, soothing salves, and even thunder shirts to be helpful.

We wish you the best of luck.