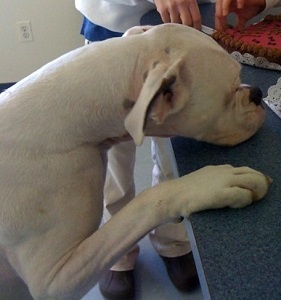 I pride myself in being a good doggie parent…. I make sure Rex gets the best nutrition he can possibly get, he sees a vet regularly, I take him for walks, I spend time with him, dote on him and give him lots of affection… but I learned today that I may not have a clue what Rex likes and doesn’t like. I read an article on Yahoo* about 10 things your dog hates… and I’m guilty of at least half of them! How could I have so blindly misunderstood the clues that Rex was sending me?

Come over here and give mommy a big hug!

For example… Did you know that dogs hate being hugged? What? Who doesn’t like to be hugged? The article says that hugging may make him feel threatened or challenged. In his world, it means I’m trying to establish dominance. Nah, I’m pretty sure Rex likes it… Or, maybe that’s why he turns his head away…?

Dogs hate patting? Seriously? The FIRST thing I do when I come in the door is pat Rex’s little head. The first thing I do when I meet ANY dog is pat his little head. I had to Google this one because in my mind, dogs and patting go together like peanut butter and jelly. Guess what? They find it annoying. They don’t like us reaching for their face. Google says WE don’t like someone touching our face or head, so why do we think a dog would like it? I guess it’s true…I don’t like people touching my hair. It feels like an invasion of my personal space… but a little pat on the head now and then wouldn’t be so bad, would it?

Sure, you can jump up on the counter!

Oh, and guess what? Dogs don’t like for us to be too lenient. I thought I was just showing Rex a little love if I let him jump on me, or pull on the leash. But nooooo… ‘says they want us to be the pack leader and be the one in-control. Really? They want us to set boundaries and provide structure. REALLY? Then why do they continue to TRY to get away with things? Why do they test us? Dogs have an innate desire for leadership. They may challenge your authority at times, but overall, your dog will be happier and more relaxed when he knows that you are in-charge.

Let’s just hang out and cuddle!

I find it hard to believe that dogs don’t like being lazy. I mean, if you turn your back for a second, who is stretched out in your spot on the couch? Well, I have to question this a little because it’s apparent that some dogs are lazy. However, laziness can be a result of their lack of mental and physical stimulation. A healthy, active dog will be more like that little kid that can barely contain himself, so he wiggles and squirms and whines… Dogs want to run and chase something. They don’t want to be a slug.

Get this…supposedly, dogs don’t like baby-talk! So just HOW are we supposed to talk to them? My little Rexy-wexy-boo-boo-boy LOVES to dance around and twirl when mommy talks baby talk. And I am SURE he knows which toy I’m talking about when I tell him to go get his purple-wurple-monkey-bunkey! The article says he just doesn’t comprehend and it’s very confusing. Maybe the writer of said article has a dog that just isn’t as smart as mine…

We have so much to learn!

So just how are we to know when our dog doesn’t like something? Apparently there are signs… we just need to pay more attention. His body language will give it away. Maybe he leans his head away from us or tenses up a little? Maybe he avoids eye contact with us. He might keep his mouth tightly closed or awkwardly lick his lips. He may pull his ears back against his head. All of these are signs that a dog is uncomfortable, and I admit, I’ve seen them all. I’m obviously not going to win doggie mother of the year, but learning to look at the world through Rex’s eyes might be a good place to start.

For more reading on Canine Body Language, talk with our Trainers about your dog’s behavior!