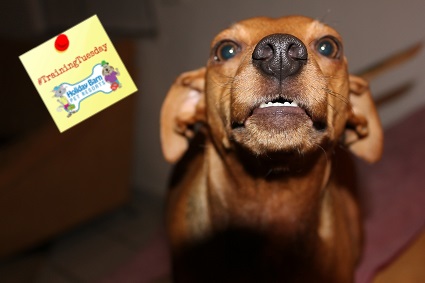 Handler aggression is a term used to describe dogs that have learned to use aggression to stop pet owners and various pet professionals from asking things from them that they simply don’t like, or deem as unfair. Most of the time these types of dogs are resisting routine care such as nail clipping, vaccinations, obedience training or control, etc. These dogs are not vicious, however at times can be dangerous. Handler aggressive dogs don’t attack, they simply stop people from doing things to them they don’t like. These dogs are not angry, nor do they not love their owner or pet professional. There are five obvious stages of handler aggression. Learning to read the behaviors that coincide with each stage will help pet owners and pet professionals understand why dogs become handler aggressive.

Handler aggression is rarely ever caused by prior, true, physical abuse to the dog. Many professionals in the pet industry, such as veterinarians, groomers, trainers, ect., experience these stages every day. Some dogs will progress through these stages in classical fashion. Other dogs may skip stages depending on their level of genetic confidence and the level of environmental stress applied to them (for example, a groomer brushing out a mat, a trainer pushing a dog into a down, a veterinarian administering a vaccination, etc.). Other dogs may take years of learning to develop handler aggression. These are the stages of learning handler aggression.

The first stage of aggression is looking. Experienced trainers often refer to this as a “head turn.” A head turn occurs when a dog whips his head back in a direct and deliberate fashion to “see” the target. The target could be a brush, a leash, a dryer, or a hand! Pet owners and pet professionals should view this as a warning. Before a dog can further advance through the stages of aggression he has to visually map out the target. A dog at this stage does not have near enough confidence to actually bite, however, the human needs to realize that the thought of acting aggressively is going through the dog’s mind.

The second stage of aggression is licking or mouthing. This is meant to subtly test the individual or object that is applying the environmental stress. If the individual backs away, the dog will perceive this as a “win”. This communicates to the dog that he now has the green light to move to the next stage of aggression if he feels the need to. Further, if the individual pets or soothes the dog to “calm it down” the dog will perceive this as weakness, further empowering the dog. This will significantly increase the dog’s confidence to take further action.

The third stage of aggression is growling, showing teeth or lifting lips. This stage is very similar to the second stage, only not as subtle. Growling is a verbal command to the human from the dog. The command he is giving is, “STOP”! Not “Please stop”, the dog is in fact ordering you to stop what you are doing, now. When the dog is lifting lips or showing teeth, he is doing so as a display to the human that he has his lips out of the way. The dog is showing the human he is ready to bite, his own lips are out of the way so that if he has to bite he won’t puncture or injure himself. Once a dog has progressed to this stage, an actual bite is not far off. The reason the dog isn’t biting at this stage is 100% due to a lack of confidence. Pet professionals and pet owners that don’t read these stages often make the mistake of comforting or backing away from a growling dog. While this may be necessary at the moment to avoid a dangerous incident from occurring, it must be noted that in doing so, this will increase the dog’s confidence to move to the next stage.

The fourth stage of aggression is shallow, front tooth biting. This stage still acts as a warning from the dog, just with much more assertion. In this stage we see a dog gaining confidence in using aggression as a physical correction to humans for inappropriate behavior. The dog bites shallow because of a lack of confidence. What the dog is saying is that if a fight ensues, he is ready to get away quick, essentially not committing to the fight for the long haul. It is natural for the human to move away quickly to avoid getting bit, however, once again this only builds the dogs confidence and on to the next stage we go.

The fifth stage is demonstrated with full, hard bites. They may be quick full bite and release bites, or full hard bites with little to a lot of holding on. Usually “fair” handler aggressive dogs will be harsh but not over the top. Meaning as long as the handler backs down, they will quit biting. This type of dog has gained a lot of confidence and is no longer thinking about escaping if a fight arises. He is now ready to engage for the long haul. He now believes if a fight ensues he would be able to win. This is a dangerous dog. Once a dog has progressed to this stage, he feels no need to use the warning systems of the previous stages. The bites are now with the back molars and can be crushing. These types of bites will inevitably require the human to visit the hospital.

Knowing these five stages can help pet owners and pet professionals read early signs of handler aggression. So often the cliché phrases are uttered, “He’s never done that before”, or “he just turned on me”. Dogs nearly always show these signals over time, it’s just that individuals often don’t pick up on them. Keep in mind; once a dog knows they can correct your behavior for one thing, they will often expand what they want to correct you for. For example, it may have always been okay in the past to nudge the dog off the couch, but now that the dog has learned this new skill, he may one day correct you for what you always thought was okay. Dogs don’t have the ability to sit down over a cup of coffee in the morning and explain to us that today they will teach us not to push them off of the couch anymore. Identifying these signals early is the key. When interacting with pets, especially at times when we must put a certain amount of environmental stress on them, always keep these stages and warning signals in mind.

Author: Melanie Benware, Trainer, Glen Allen A well-behaved, trained dog is a pleasure to own because he can go virtually…

There are five main principles to always consider during dog training lessons. These principles are the core ingredients to behavior modification…