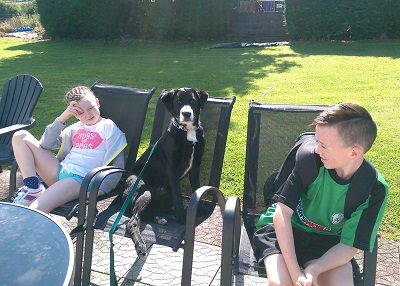 Slash and his Human Siblings

It has been a week and today I went back to Slash’s house for his second lesson. O’ what a difference a week can make. Slash came to the driveway when I pulled up, sat down and watched me get out of the car. I squatted down, said his name and he came right up to me, tail wagging, but….NO jumping! Michelle came out the front door to greet me and Slash ran over to her and….NO jumping! Then the two young kids came out and, guess what, no jumping. I could tell right away that Michelle and her family had done their homework.

Before working with Slash, Michelle and I needed to catch up on how the week had gone. He was now eating two meals a day, rather than free feeding; he was rarely jumping up on them; he sat when asked; he was digging less; and walks were more enjoyable now that they had learned how to do “The Proper Walk”. As we were talking I noticed the most wonderful thing… Slash had laid down in the grass a short distance away from us and was content. The kids sat down in the patio chairs and instead of jumping and biting at their clothes, he sat beside them. He did invade their space a bit but the reduction in his mouthing was remarkable!

Everyone in the family thought things were going very well, but not perfect, yet. When off the leash, Slash still had some wild moments where he would jump, pull at clothes and then roll over as if to ask for a belly rub, only to start biting at your hands. Michelle and I discussed continued corrections and solutions.

Next, we worked with Slash on toy interaction. He played with his toys when he was by himself but when people were in the yard he only wanted to play with the humans – like they were dogs. We discussed keeping some toys inside as special toys that Slash only played with when he was with his family. This will allow him to use his mouth the way he wants but on a toy, rather than the human. This is a balancing act: You do not want to reward him for biting by putting a toy in his mouth. We would ask Slash to sit and then free him to get his toy, play a bit of tug before having him release it, and continue the game again. Slash was slowly getting the hang of it and I am confident that if they do as well with his homework this week he will continue to improve.

One of the other things Michelle was struggling with was Slash’s game-playing when she was outside hanging laundry. When she wasn’t looking, Slash would steal something from the basket in an attempt to have her chase him. She could tie him up while she did the laundry but neither one of us wanted to do that so we decided that teaching Slash a “climb” command would be best. The Climb command teaches him to go to a bed or any predetermined object and stay put. She can move the object around the yard and also use multiple objects… the only requirement for Slash is that he does not get off the “climb”. We also discussed that as Slash gets better with the command they can eat on the patio without him trying to get the food, the kids can have friends over without him jumping all over them, and they could really enjoy having Slash around without him always being underfoot and into everything they were trying to do. As I said last week, Slash is smart; he caught on very quickly and was thrilled to be learning something new!

I left Michelle and Slash with new homework to work on, new ideas for calming techniques, and teaching him how to choose calm vs. jumping/mouthing. They are very eager to help Slash become the dog they want and he is very capable. One of my favorite things about dog training is obviously seeing the change in the dog but especially the change in the humans. In the moment, you do not realize just how much stress it causes when your dog is acting out. It isn’t until after the fact, after they are better behaved and you feel a sense of calm and happiness, that you realize how much you were missing it. Bringing a dog into our lives is supposed to be happy and exciting. It’s about bonding with and loving this new furry family member, but it is also about learning and growing, and not just for your pup. There is a lot we can learn about ourselves as we teach and work with our dogs.

NEXT WEEK WE JOIN MELANIE WITH SLASH AS HE ACCELERATES HIS TRAINING INSIDE A BOARDING/TRAINING FACILITY!