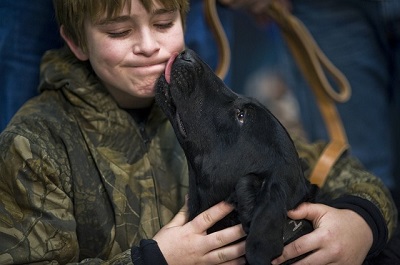 Hunting with dogs has become such a controversial issue. Some of the controversies center around the game that is being hunted, but much comes from animal rights advocates attempting to put a stop to what they consider inhumane treatment of the hunting dogs. The stereotypical hunter is seen as having no care or compassion when it comes to their dogs. Opponents claim that hunters rarely treat their dogs any better than the animals they take pleasure in killing. And while we may not want to admit it, we too are sometimes guilty of subconsciously presuming neglect, mistreatment, and even cruelty when we hear a dog referred to as a “hunting” dog.

Years ago, it was common for hunting dogs to be kept outside with little human contact. Many hunters believed that treating a hunting dog with comfort and kindness would make the dog physically and mentally weak, as well as diminish his desire to “work” once he got a taste of the easy life. Oftentimes a hunting dog was withheld affection to “toughen him up”. Depriving a dog of food or similar basic necessity after a poor hunt was sometimes used as punishment. Cuts and injuries from a hunt were left untreated. Some hunters felt that in order to make a dog a good hunting dog, tactics must be used to “force” that behavior. Training methods which may have involved inflicting bodily discomfort were used to teach the dog his sport. These things are inconceivable to those of us who have 4-legged family members that we adore.

Just as not everyone is a good owner to a family dog, there are, sadly, hunters who exist that truly are guilty of mistreatment or neglect of their dogs. This is evidenced by the number of hounds let go or left in the woods to fend for themselves after hunting season, often in poor health with signs of malnourishment or disease.

Has There Been Any Improvement in the Treatment of Hunting Dogs?

“There has not been any marked decrease in the abandonment of hunting dogs, and in fact, I feel confident saying… that we care for more hound types than any other category of dog.”

Granted, it’s difficult to know which of the many hound-type dogs were previously used for hunting, as Tabitha notes. But as the SPCA has expanded their reach regionally, they are now visiting more county shelters in rural areas of the state that likely have a larger hunting population. A larger hunting population affords more hound and hunting-type dogs showing up in shelters.

Unwilling to abate optimism, times really are a changin’. With the energy behind animal welfare, early hunting education, and the general goodness and compassion of people, a positive impact is surely being made towards the loving treatment of our hunting canine friends.

The hunter himself has undergone a metamorphosis over the past hundreds of years… from a noble gentleman to the more provincial stereotype, to today’s more affluent, ethical sportsman. Today’s hunter is scrupulous about the sport and his dogs. Frequently he too is a passionate animal advocate. Often, an avid conservationist. The appeal of hunting is more than ever being realized by well-educated professionals as a means of getting out the office and enjoying the great outdoors. The icing on the cake is sharing that time with his dog.

Today’s “norm” finds less and less hunting dogs being kept outside, but rather living with the family in their home, usually doubling as a family pet. Hunters know that living with their dog increases the bond between them as admiration, familiarity, and respect between the two is enhanced with a closer, daily relationship. As confidence comes from a dog knowing his place in the pack, it is only by living with his pack that he learns pack structure. A more confident, well-balanced dog certainly makes a better hunting dog.

Today’s contemporary hunter knows that a hunting dog doesn’t lose his instinct for hunting, regardless of his environment and care. With a little encouragement, positive reinforcement and reward, hunting breeds will quickly catch on. Harsh training tactics are shunned upon by a majority of the hunting population and not nearly as prevalent as in years past. In fact, hunting dogs have been shown to be much better at their sport when professionally trained in obedience and commands, and well socialized with people and other dogs.

Hunting breeds instinctively and genuinely want to hunt. They live for it and they love it. Beagles, for example, are happy living their life on the couch or lying on the back porch… but turn them out into the woods and the real fun begins! Most hunting dogs have an eager-to-please personality and are proud to share their successes in the field with their owners. These dogs love the excitement of the chase and the joy of the finding. There is no greater thrill than observing a hunting dog pursuing his prey…caught-up in the moment, tail high, eyes alive and ablaze. It’s exhilarating!

Look online and you’ll find a slew of articles written by hunters revealing great sentiment for their dogs. It is offensive to them that people assume their dog is treated less well than a beloved family pet. The truth is, the bond between a hunter and his dog is great. They’re partners. There are few things more gratifying to an outdoorsman than developing that connection with their animal. Remember the Cabela’s commercial showing a hunter driving down the road with his dog by his side? The caption read, “Unspoken friendship.” Never a more devoted friendship is had between a man and his dog than that of a hunter and his 4-legged hunting buddy.