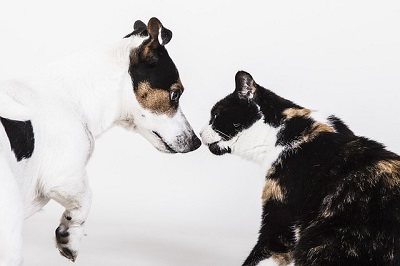 Thinking of getting a dog to go with the reigning feline emperor of your home? Do you have visions of that next Christmas card… your adorable dog and cat lovingly curled up together in front of the fireplace, affectionately grooming one another? You know, that vision could quickly disintegrate to angry creatures streaking through the house, knocking over tables and lamps, fur flying, a lot of hissing, growling, barking… kind of a Tom & Jerry scenario but with a dog and cat rather than a cat and mouse. So much for the Christmas card! We are sometimes asked, do some dogs just do better with cats? If so, which ones? Let us explain what to look for when selecting dog and cat “siblings”, and what you can do to prevent the “Tom and Jerry” catastrophe.

A couple of years back, Holiday Barn Pet Resorts published a blog about the difference between cats and dogs. In this blog, we talked about their unique relationship and how they communicate. Dogs and cats view their individual worlds very differently. When attempting to combine these worlds, we need to look at it from the animal’s point of view… What are they thinking? Why do they act the way they do?

It’s all about the Chase!

Let’s face it, dogs like to chase things. Everybody knows that! All we have to do here at Holiday Barn Pet Resorts is pick up a tennis ball, and our doggie guests perk up and get ready to run and pounce! Canines are designed by nature to chase small things. It’s called a predatory chase drive. It’s actually similar to a “reflex” in that it’s a canine’s natural response. The instinct is triggered by movement, so anything that moves quickly past your dog, whether it be a ball, a bicycle, squirrels or a cat, gets an instantaneous reaction. Our dog’s ancestors hunted and chased small vermin for food. The desire to chase is still very instinctive, but now-days, with exception to hunters, dogs will usually chase because it’s fun and because they want to play. Intrinsically they find chasing to be very gratifying.

Some breed types have a higher prey drive than others. These include Sighthounds, Bird Dogs, some Herding dogs, and Terriers.

Finding Dog Breeds that are Good with Cats

Sighthounds, not an official AKC breed category, consist mostly of members from the “Hound” group. They are lumped together for being tenacious chasers. As hunters, these dogs specialize in running after prey, keeping it in sight, and then dominating it with incredible speed and agility. They possess keen vision and are able to detect motion – like cat movements – very quickly. And if the cat runs away from them, it will likely be seen as prey. Greyhounds, whippets, afghans, Irish Wolfhounds, Italian Greyhounds, and Salukis (among others) are all sighthounds.

Bird Dogs, again, not an official breed category, is a name given to various Pointers, Retrievers, Setters, and Spaniels used to hunt or retrieve birds or other small game animals. Each “bird dog” has a different function. “Pointers”, like Brittany Spaniels and English Setters are used to locate game. “Flushers”, like Boykin Spaniels, Springer Spaniels and Cocker Spaniels find the game and drive it from it’s hiding place. “Retrievers”, like Labs, Goldens, Standard Poodles and others, obviously retrieve game. Whether a pointer, a flusher, or a retriever, a cat could easily “excite” their hunting instinct. Despite their inherent purpose, they are normally very congenial with other animals due to their respect of the pack.

Herding Dogs: Herding dogs are very intelligent and have high energy levels as well as a great instinct to chase. But the purpose of their chase is to herd their prey, not to kill them. This breed may not mean to harm your cat but could possibly injure them through the nipping and nudging that is a natural part of herding. Other members of herding group include the Australian Shepherd, the Australian cattle dog, the German shepherd, the Corgi, the collie, and the Sheltie.

Terriers: These cute little apartment dwellers were bred to hunt and kill vermin, believe it or not. A fast moving cat- or anything else whizzing by – could quickly trigger their predatory instincts. Some of the more popular terriers in this group are the Jack Russel, Cairn Terrier, Welsh Terrier, Rat and Fox Terriers, and the American Staffordshire terrier.

It was unintentional, but it looks like we’ve pretty-much covered four of the AKC Breed groups: the Hound group, the Sporting Group, the Herding Group, and the Terrier group… What’s left?

The Best Dog Breeds for Cats

The Working Group is comprised of mostly large dogs, some of which hunt large game but show little interest in smaller prey. These dogs are built and bred for guarding, protecting, working – as in hauling, driving cattle, police work and military work. Overall, they are gentle giants who live peacefully and lovingly with their families. However, due to size alone, the Mastiffs, Rottweilers, Great Danes, Newfoundland’s, etc. may not be the safest for your cat to be around, although it is unlikely they would purposely harm the family cat.

The Toy Group brings a smile to your face just thinking about these happy little pups! Cavalier King Charles, Chihuahuas, Pomeranians, Pugs, Yorkies, Shih Tzu’s and others were bred as companion animals. Although some can be snippy and protective, most are friendly, affectionate, and adaptable. This group usually does well with cats.

Lastly, the Non-Sporting group is a diverse group of breeds with varying sizes and personalities. From the Poodle to the Lhasa Apso, to the Chow Chow, the Bichon Frise, the Boston Terrier, and the Dalmation (to name a few), there are very little similarities between them! It would be hard to give an all-in-one “rating” to this group regarding their tendencies towards cats. Generally, they are pretty amiable, but each should be considered case-by-case.

But that’s only part of the story…

While it’s true that certain breeds have more of a predatory drive than others, much of their inclination to “chase” has more to do with the dog’s temperament, obedience, prior socialization, and past experiences. For example, a dog with a low prey drive, but poorly socialized, will not understand how to approach or relate to a cat and will probably respond inappropriately. A dog who has faced an aggressive cat in its past may react with hostility when meeting another cat.

We can help your dog overcome their past sensitivities so that they can live harmoniously with the feline persuasion. Prey drive cannot be eliminated, but it can be managed. It is best not to reprimand for this behavior, as this would only confuse and frustrate the dog. Prey drive is not aggression and should not be a punishable behavior. The goal would be to “re-direct” or “modify” the behavior. For example, many dogs with high prey drives have been redirected to sniff for drugs or other types of contraband. In these instances, they were taught to consider the contraband their “prey”. Another example is how the Greyhound’s desire to chase has been adapted to racing. A family dog’s prey drive can be redirected with proper Training, thus suppressing the inclination to chase the cat.

Professional Dog Training is key. Among other obedience commands, your dog will need a strong “recall”. Your dog needs to be able to respond to you despite the distraction… whether it be a fleeing cat or possible danger. Plus, they must be socialized, or rather “conditioned” to act appropriately around other pets. The Trainers at Holiday Barn Pet Resorts can help you with that.

So Which Dogs are Best with Cats?

Just like humans, dogs have different personalities, altered by their upbringing, lineage, conditioning, or preferences. There are some dogs, even hunting types, that could care less if a small object flies past them! Have you ever tried to interest a dog in a game of fetch and he just looks at you as if to say, “So what?” And then goes off to sniff the grass… In all rationale, it has been a long time since dogs have had to hunt and kill for their food. “Instinct” can be hidden under layers and layers of “reprogramming”. It’s still there and can be triggered but that impulse is sometimes rejected or disregarded by our canine friends.