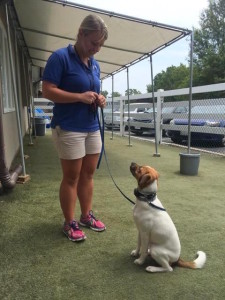 Poor dogs… how frustrating it must be to not be able to talk. I mean, they do “talk” in their own way, but they are not able to formulate words, tell us where it hurts, let us know what they want… That has to be difficult.

The other day I was lounging on the couch beside my dog when he purposely sat up from a comfortable lying position and looked directly into my eyes. He has never done that before…so deliberately without giving me a hint as to what was up. I asked him what he wanted, and he didn’t move… just kept staring. I tried using his words, “Do you need to go outside?” No response. “Do you want a treat?”, to which he did slightly flinch, but continued just to stare into my eyes, his body very still. “Do you hear something?” No response. His expression was “normal”, his face and features were relaxed, no head tilt, no wide-eyes or open mouth. There was no change in “energy” in the room… I was reading, the room was quiet. There was no reason that I could determine for him to suddenly become attentive. He sat staring in that manner for about 3 minutes, when finally he laid back down and relaxed. Isn’t that strange?

Usually when a dog gazes at you, they are waiting on some kind of instruction. Have you ever seen a dog look at his trainer? He’s concentrating on his/her face in hopes of understanding what she is trying to communicate. To my knowledge, there was no reason for my dog to suddenly stop and look to me for direction….at least, not that I’m aware of. It had to be frustrating for him not to be able to make me understand what he wanted to say.

Have you ever heard of “frustration barking”? It’s when dogs continually bark at you because they are unable to either make you understand what they want, or they are unable to understand what you want. Some call it “demand” barking, because they’re demanding to be heard. Just like us, they get aggravated when they can’t get their point across, or can’t “hear” what we are trying to tell them. Sometimes they just want something… a toy, or the dog on the other side of the gate, so they’ll bark to get it. Frustration barking is a good indicator that there is a lack of understanding between the dog and the human.

Spending time with your dog is the first step in reading and understanding them. Yes, it is true that there are very common cues or body language that most, if not all dogs use and it is helpful to learn them, but it is also important to look at your dog as an individual. As an individual, your dog has his own ways of communicating. For example, if your dog growls when playing, it is not necessarily an indication of aggression. It could simply be a “play growl”, which is normal. You need to learn the difference.

Clear Communication to Build Trust with Your Dog

Working with a trainer is an important step in helping you communicate with your dog, learn to read your dog and build a relationship of trust and understanding. The more your dog understands what is being asked or required from him, the less frustration your dog will have in his life. Looking back at the scenario of “frustration barking”; if your dog is barking at you because he wants you to play ball or go for a walk, that does not mean you need to stop what you are doing to acquiesce to your dog’s demand. Having clear communication/commands will help you redirect your dog to something else until you have the free time to engage your dog in his favorite activity.

As I am writing this, Mongo brought me his tug and dropped it in my lap, this was very clear communication on his part that he wanted to play. However, I am working, I simply told him “no”, put the tug on the ground and then told him to go “climb”. I swear I saw his shoulders sag in disappointment but because of our consistent training and communication he went to his bed (climb) and laid down. Now, when I am finished, I will reward him with a vigorous game of tug! It’s all about balance and clear communication.”