A LOOK AT THE LABRADOODLE!

This month’s Camper of the Month for Glen Allen is an adorable little brown Labradoodle appropriately named Coco! Fairly new… 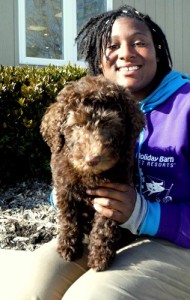 This month’s Camper of the Month for Glen Allen is an adorable little brown Labradoodle appropriately named Coco!

Who is responsible for the name?

Fairly new in terms of breeding, the labradoodle has an interesting history. The name “labradoodle” was actually first used in 1955 when Donald Campbell, a British speed breaker, in his autobiography jokingly referred to his dog as a Labradoodle “since he is a mixture of a Labrador and a poodle, all black with thick curly hair!” I wonder if Australian breeder Wally Conron knew Donald Campbell’s name for this “mix” when he decided to breed a Labrador retriever with a poodle…

Why breed a Lab and a Poodle?

Wally was working as a breeding manager for the Royal Guide Dog Association of Australia, breeding only the best Labrador guide dogs. A blind woman in Hawaii needed a guide dog who would not shed hair because her husband was allergic! Wally thought… this is easy… we’ll just train a minimally-shedding standard Poodle as a guide dog! So for the next 3 years, he attempted to have 33 poodles trained, but they all failed. The poodle just wasn’t cut-out to be a guide dog!*

Who wants a labradoodle?

Wally creatively thought of one more possibility… He took his best Labrador guide dog and mated it with another working breed, the standard poodle! He hoped for the gentleness and trainability of the lab, and the low shedding coat of the Poodle. Three cute little cross-breed puppies were born and needed to be trained, but no one would take them! Everyone wanted only pure bred dogs! That’s when Wally came up with the name “labradoodle” and went to the press telling them they had invented a new dog. It was just a gimmick, but everyone went crazy. The day before, no one wanted a cross-breed, but the day after the press release, everyone wanted these dogs!

The Labradoodle is considered more of a “hybrid” than a breed, so puppies do not consistently have the same characteristics. Their hair may be soft or wiry, curly or even straight! They can come in just about ANY color, not just the black, blond, or brown of a lab, but apricot, silver, and parti colors like a poodle! Most actually do shed! Like our little Coco, labradoodles are friendly, energetic, and good with families and children!

“Sultan”, one of the 3 labradoodle puppies from the first litter, had ALL the qualities Wally was looking for and he successfully worked as a guide dog for the woman in Hawaii for 10 years!

How to Know When Your Dog is in Pain

The International Veterinary Academy of Pain Management (IVAPM) has proclaimed September as Animal Pain Awareness Month, to coincide with our…

Back in the October when we talked about “Fall Allergies in Dogs”, I never thought about just how bad allergies…