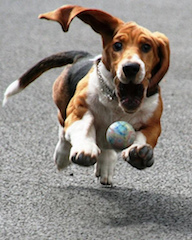 Does your dog chase his tail? Follow lights or lasers? Go after the garden hose? Obsess about a ball? Although these behaviors are entertaining to us, they can be problematic for your dog. I do not recommend encouraging them, whether it’s a natural behavior or something they have been taught. Let’s examine the most common obsessive behaviors, why they start and reasons your dog shouldn’t do them.

One of the more common behaviors that starts as puppy curiosity can easily become obsessive if we aren’t careful. Of all the behaviors we are discussing in this blog, I am the least concerned about tail chasing. Most dogs do it for fun… it’s an endless game of catch that most dogs never succeed at actually catching their tail. However, for some dogs it can become a nervous behavior. Chaco, my previous shepherd, did not have the best start in life. A working line German Shepherd, imported to do protection work and then left to wither in a kennel for 2 years, he turned to his tail. When I rescued him he had managed to perfect the a art of chasing his tail and could easily catch it, he was missing hair off the last third of his tail. Exercise, training, love and security brought his mind back to balance….unless he got stressed. If I turned on the vacuum he would jump up from a dead sleep and start chasing his tail. If he boarded in a kennel, he would start chasing his tail. For him, if stress was introduced into his environment, his default move was to chase his tail. It took years to completely break him of this habit and teach him healthy ways to deal with stress.

I know a lot of people that find it funny, watching a dog (or cat) chase around a little red dot, the whole time we know they are never going to catch it. Did you know some people use laser pointers when training Service Dogs? If someone is wheelchair bound and mostly nonverbal they can use a laser pointer to point at object for the dog to bring to them or even at the light switch for the dog to turn the light on or off. However, using it to entertain yourself by having your dog chase it around or as a form of exercise for your dog is not the best idea. First, some dogs can then become obsessed with other types of light. Oreo, my dad’s Great Dane, had been taught to chase a laser in his previous home it then morphed into any type of reflected light. If my dad’s watch caught the sun and the light hit the wall, Oreo was on it. He, if left to his own devises, would pace for hours, searching for the “magic light” to reappear. I also had a client who played with a laser pointer with her dog the result was a dog that would dig at the carpet in search of the “red dot”.

Although this one seems harmless and countless dogs enjoy it, it can cause so many problems. I watched a video just the other day of a toddler, maybe 2 years old, sitting in the grass with the hose in her hand, randomly spraying water at the family Black Lab. As soon as the water would turn on the Lab would start biting the water. The child would laugh and repeat. I could hear the parents laughing in the background, everyone was having a great time and all I could think is “what happens when the dog accidentally bites the child”. Also, from the perspective of a Holiday Barn (or any Boarding/Grooming/Day Camp facility) employee, we use water hoses to do so many jobs, having a dog that is obsessed over the hose makes our jobs harder and can be dangerous. Trying to bathe a dog, trying to spray-clean the play yard, or trying to fill up the water bowl or bucket…. All of these simple tasks are not so simple when you have a dog biting and jumping at the water. And yes, we unfortunately have seen many employees accidentally bitten by a dog because of this type of behavior.

I know, this one seems harmless, who doesn’t love to play fetch with their dog?!?! I know I do, not only does Mongo LOVE it, but it also wears him out. Mongo’s drive to retrieve has not only given me a great way to interact with him but it has helped me teach him to swim and was a must for his narcotics detection training. However, there can be too much of a good thing. First, control….yes, I encouraged the behavior in the beginning to build his drive. Then I had to put a level of control on it by having him randomly “sit” or “down” during a retrieve, or by having him do a few heel paces before going for the retrieve. All of these things help me control the action so he doesn’t become obsessive. Also, notice I am speaking of the “retrieve”, not necessarily the ball. Yes, Mongo likes a ball but early on I also encouraged him to retrieve multiple objects so he wouldn’t obsess over one thing. He has his ball, giant kong, puller ring and bumper. I also make sure that when the game is over, those specific objects are put up. I do not allow him to keep them and constantly chew on them. Not only does this keep him from obsessing over the object but it also protects his teeth. Research has shown that the constant grinding on a dogs back teeth when chewing on a ball will actually wear down their teeth over time.

I’m not saying do not play with your dog… Play is important. I’m simply suggesting that we think about the long term effects of what we are doing. There are ways to play with the laser pointer, garden hose and ball without causing problems. Adding training, control and balance into these activities is the key. Make sure you do not overdo it and that your dog knows that when the game has stopped that he stops too. If your dog struggles with an obsessive behavior do not hesitate to get help, Amanda and Schylar are ready to help you!