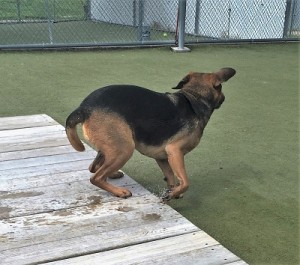 Thomas gets the zoomies after a swim!

I didn’t hear the term “zoomies” until I started working at Holiday Barn. I had witnessed my 4-legged pals with the zoomies before, but never put a name to it. Do you know what the Zoomies are? It’s when your dog spontaneously freaks out… running like a crazed fool… circling like the Tasmanian devil… until he collapses into a panting, exhausted, pile of fur.

Seriously, What are Zoomies?

Of course, somebody had to get all technical and put a real name to the zoomies… They call it FRAPs (Frenetic Random Activity Periods). Or maybe it was a FRAP before it was a zoomie, but never the less, Zoomies is a more descriptive term. “Frenetic” is a good word, though. Frenetic means: “fast and energetic in a rather wild and uncontrolled way”. Oh yeah… that’s the zoomies, alright. Kind of like a doggie power-surge.

There are other names for this kind of behavior… Bichon Frise owners call it the Bichon Buzz. French bulldog owners refer to it as the Frenchie 500’s. Then everyone makes up their own terminology: Spazzing out, temporarily possessed, “butt on fire”, puppy power hour, psycho pup, tantrums, getting the wiggles out, crazies, etc.! Some dogs don’t get the zoomies. Many get the zoomies as puppies and then they grow out of it. Some continue “zooming” well into old age, like my own 10-year-old who still has daily zoomies! Are certain breeds more prone? That does not appear to be the case. Get a group together and nearly everyone can relate to a similar activity by their dog.

At Holiday Barn, we frequently see the zoomies after a Bow-Wow luau. We have posted videos on our Facebook page of dogs coming out of the pool and immediately going on a zoomie rampage… flying around the pool, shaking the water from their fur, rubbing their face on the turf, all in warp speed. You may see something similar at home after a bath. At Camp, we have learned that the zoomies can be “contagious” … A Camper will all at once go into a frenzy while his playmates look on, and then suddenly another is “infected” and takes off on a ruckus of his own. One dog’s zoomies can easily incite play amongst his pals.

Are the Zoomies a Bad Thing?

Depends on the degree to which your dog acts out. Most dogs just do the crazy running and circling, in which case, the zoomies are not a bad thing… actually somewhat fun and entertaining! However, some dogs will get destructive during the zoomies, i.e., nipping, bouncing off of people, tug-of-war with household items, in which case the zoomies can be bad. Also, large dogs who go into a zoomie tailspin can unintentionally be destructive and in some cases, dangerous. Although there is one school of thought that suggests the zoomies may be rooted in a behavioral issue, provoked by anxiety, stress, or other emotional discord, most believe it to be normal conduct in dogs at some point in their lives.

Common in agility, the zoomies may sometimes be caused by overstimulation. Termed as “stressing high”, a dog may react to the energy of an agility competition by acting out the zoomies. Holiday Barn pack member, Dawn, a skilled Handler in Agility says, “I’ve learned that when my dogs zoom in the ring, it’s either because they’re highly stressed or because they’re too overwhelmed by the environment to focus on me and respond to my commands.” Dawn believes that when her dogs get the zoomies in the ring, it is sometimes because she is amped up and they are reacting to her high degree of anxiety. She has learned that the key controlling the zoomies is understanding the stressors and strategizing how to eliminate or redirect the stress. Then she is able to get her dogs to refocus.

Some Trainers have been quoted as saying that zoomies only occur when a dog has not had sufficient exercise, but that does not always hold true. Holiday Barn Trainer, Amanda, says, “I wouldn’t say they [the zoomies] ONLY happen when a puppy or dog hasn’t had enough exercise, however, I do feel exercise has an effect on how frequent or how intense the zoomies are. Puppies almost always have zoomies at night… right before bed time they usually need to get rid of any left-over energy, they usually they last about 20 minutes and once they get zoomies out, the pup usually crashes for the evening. If an adult dog has zoomies often then I would say it relates more to lack of exercise.”

The reality is that this explosion of intense energy appears to be truly a happy, exhilarating undertaking for your dog. There is excitement, a twinkling in the eyes, tail held high, and what’s that – a smile on the face? Did I hear a woo-hoo?!? After a zoomie, your pup is content and relaxed… Satisfied and ready to cuddle. That can’t be all bad, right?