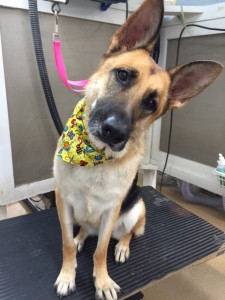 It’s the cutest thing ever… You talk to your dog and she cocks her head to one side, and your heart just melts. Some of our Holiday Barn Pet Resorts guests are known for their head tilts, like Jinx, pictured above.  “Oh, that Jinx has the CUTEST little head tilts!! Quick!  Grab the camera!  Let’s see if we can make her do it again!”

Why does your dog cock their head to one side when they hear a sound, either vocal or otherwise? They could be doing it for a variety of reasons, most of which are simply harmless - and adorable!

Consider this… You’re sitting in a class and the teacher starts talking in a foreign language.  A typical reaction might be to involuntarily wrinkle your brow and cock your head to one side as a means of deciphering what is being said, or displaying confusion. Couldn’t your dog have the same reaction if they don’t understand what is being said? Obviously dogs don’t have a full handle on the English language.  It would make perfect sense that they cock their head to one side while trying to figure out what we are saying. However, a dog’s hearing is very different than ours.  There could be more to head tilting than meets the ear… I mean the eye.

Some experts say that a dog’s ear flaps move to detect where a sound is coming from.  Your dog may be adjusting his ear flaps in order to allow a sound to enter more efficiently. Dogs with prick ears may cup their ears forward in order to interpret a sound.  A floppy eared dog may trying to move the flaps to one side to allow a sound to enter more directly. In this case, cocking of the head is just a means to get the ears to move. Other experts believe dogs are trying to localize the sound to figure out exactly where it is coming from. However, this theory doesn’t seem logical when a dog is parked right in front of your face staring at your mouth.

Did someone say TREATS?

It could just be that they are fully concentrating on what you are saying.  Maybe they’re waiting for you to say a word that they recognize, like “treat” or “outside”. Some dogs will cock their heads only when they identify with the words being spoken. “Blah, blah, blah, TREATS (instant head tilt!) blah…” If we were to guess what the dog would say at that minute, it would be something like, “Wait a minute – stop right there!  Did I hear you say ‘treats’?” Then they continue to listen intently for the word to be repeated before starting the treat dance.

Something has come between us…

One really interesting study concludes that a dog’s muzzle obscures his full vision of our face and they adjust – by cocking their head – so that they can see around their muzzles.* Dogs are experts at reading emotions and body language, so when they are unable to see our whole face, it interferes with their ability to understand fully. Pretty interesting, huh?

Head tilting could be a learned behavior as well.  If you can get your dog to tilt his head on command, then his head tilting is definitely learned. He knows you think it’s cute, and he’s waiting for all the oohing and ahhhing – and treats – that come afterwards.

When it’s not cute

Does your dog tilt his head often – even when there is no sound or communication to trigger that tilt? As cute as it is, a consistent head tilt could indicate a medical problem. It could be something as treatable as an ear infection, or as serious as a brain disorder. Only your veterinary will be able to make that distinction. Don’t hesitate taking your dog to the vet as soon as possible if head tilting is frequent and unwarranted.