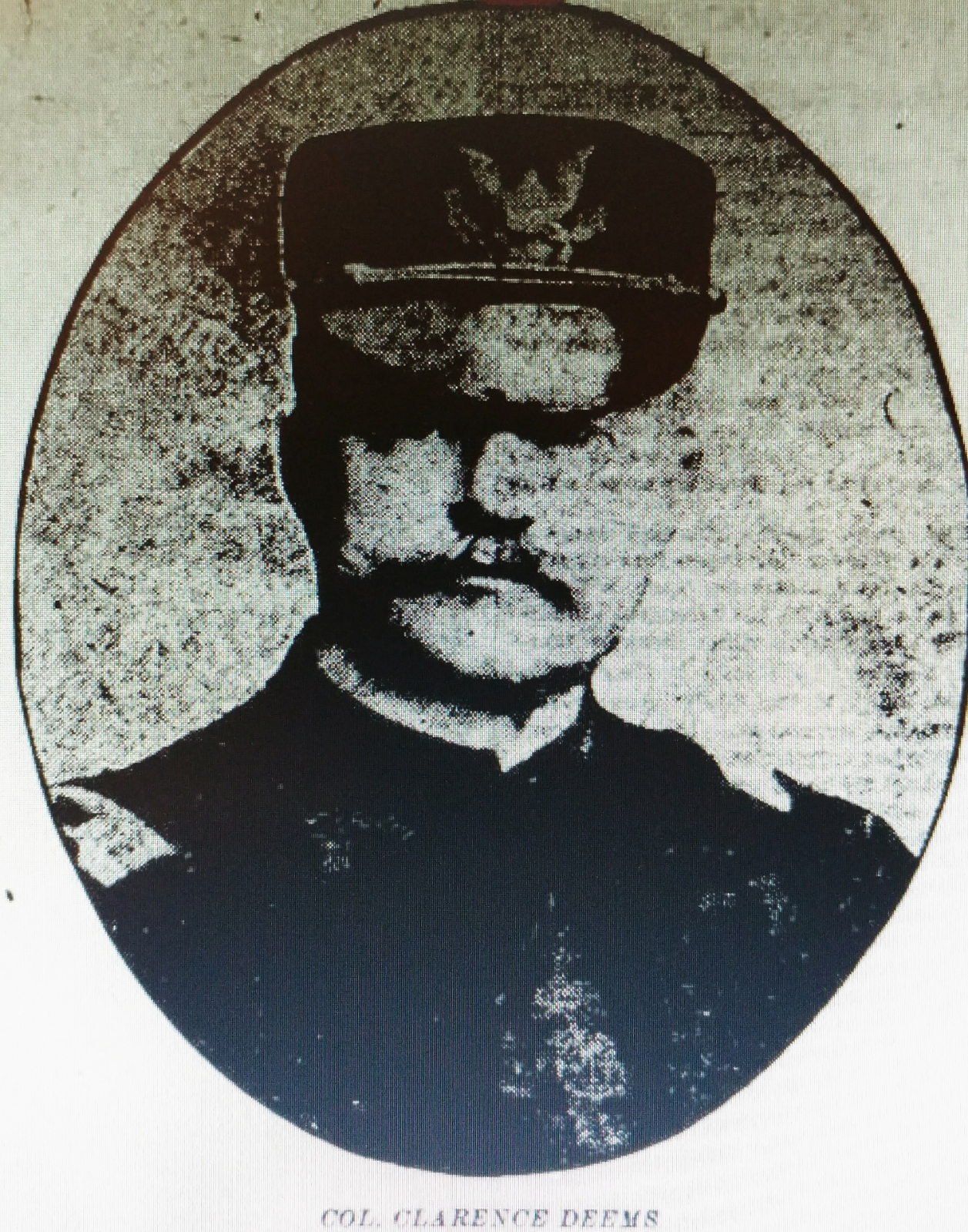 In 1908, Colonel Clarence Deems of the United States Army was considered unfit for duty, so much so, that he was forced to appear at a War Department hearing to defend himself.

Colonel Deems was no “slouch”. As a graduate of West point, he was a professor of Military Science at Maryland Agricultural college, now the University of Maryland. During his exemplary service in the US Army, he was a commanding officer of the Coast Artillery. He came from a family rich in military history. His Great grandfather served with the Continental army during the Revolutionary War. His grandfather was an officer in the War of 1812. His father was a Union general during the Civil War.

In January of 1908, several charges of incompetence were brought against Col Deems. Many of his fellow officers felt that his behavior was a sign of psychological illness. They reported that conditions at Colonel Deems’ post were in “unsatisfactory condition.” Because of these charges, Col. Deems faced a grueling examination by the Army Retiring Board as it was to be determined whether or not he was capable to serve.

The board that heard the Deems’ case met in the Officer’s Club on Governors Island in the afternoon of January 27th. Sitting on the board, Col. Charles Richard, Chief Medical Officer of the Army, was charged in determining the mental and physical condition of the gray-haired Colonel.

Just what was Colonel Deems wrongdoing? His “unnatural” affection to his little dog, Riley.

Some of the testimony against Colonel Deems was laughable. Captain Chase gave the following testimony, “I have noted with disgust Col. Deems’ affection for that dog, caressing him on occasions both official and personal. I have heard him refer to the dog as the best friend he had in the world, and I have seen the dog show affection for him when officers were standing at salute.”

Surgeon C F Morse said, “Why, that dog sleeps in the same bed with the Colonel!”

One testimony against the officer was, “It must not be forgotten that Riley jumped right up in the Colonel’s lap and kissed him squarely in the mouth. Did it scores of times!”

One witness told the story of how Riley carried off one of the Colonel’s boots, causing the commander to hobble around his quarters for an hour with one foot bootless. Further, when the boot was retrieved, Colonel Deems did nothing to discipline the dog when it had acted “in utter disregard of the seriousness of army life.”

When Colonel Deems finally took the stand, he didn’t deny any of the accusations. Instead, with “the suggestion of a tear in his eye” *, he testified that “Riley is my little fox terrier, and I plead guilty to being fond of him. I am a widower and my children are all married and I live alone, and Riley has been a great comfort to me. I can see no reason to be ashamed of it. I likewise plead guilty to Riley being fond of me and admit that at times he is so glad to see me that he jumps all over me…” Colonel Deems also responded to accusations of Riley’s “inappropriate” table manners by saying, “Riley has been trained to stand on his hind legs and beg for food, and when he does that, he is very cute, so to speak. When he begs for food that way, I invariably throw him a morsel.” Col. Deems went on to talk about Riley’s “utter disregard of army life” by admitting that he may have nipped the heels of some officers, or voiced an unwelcomed bark. Finally, he said, “That is all there is to Riley, and I am still fond of him.”

The New York Times article covering the incident concluded that Colonel Richard (the medical officer) found Colonel Deems fit mentally and physically for many years of hard service. The other members of the board took the same view and rendered a decision unanimously, refusing to recommend his forced retirement. They stated that Riley was merely the target for a lonely army Colonel’s affection, and they did not blame him for being fond of such an intelligent, lovable little dog. They also ruled that although Riley was definitely a “feisty and mischievous dog”, he too had done nothing wrong.**

Wonder what Col. Deems’ accusers would think about Holiday Barn Pet Resorts‘ luxury accommodations for our furry friends, our doggie spa, and in-ground pool? What would they think of our fondness and attachment to our little furry friends? They would probably consider us all certifiably crazy, don’t you think? That’s okay, I love being crazy.

My, how times have changed.